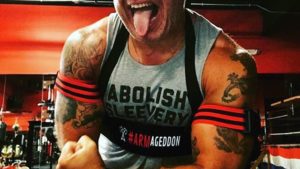 Men have been tying up areas of their limbs while working out, and taking to the gram to show off the new trend. HFM investigates whether there are any real benefits to BFR

This may appear to be an interesting fashion statement to the average onlooker. But the seasoned weightlifter will recognise the restriction of blood-flow to the muscle caused by adding pressure to the upper limb – called blood flow restriction (BFR) or occlusion.

Fitness expert Dr John Rusin describes BFR as obstructing ‘venous return while maintaining arterial blood flow via the use of specialised blood pressure cuffs or elastic wraps’. The practice has been noted to show remarkable results in muscular hypertrophy (the building of skeletal muscle) and strength.

Health experts have been discussing the technique for some time, and athletes have also taken it up, sharing their results on social media:

As with any fitness enhancing experiment, speculation of the safety of BFR is inevitable. But the science has shown that BFR causes less stress on the joints, and experts swear by its safety.

It might also be beneficial to those who are hoping to recover from injury, or those who suffer from muscle/joint issues: ‘At lighter relative loads and increased set/rep schemes, BFR training is not only a powerful bodybuilding method, but a technique that can change the game in rehabilitation and post-operative strength and recovery,’ says Rusin.

BFR was created in Japan by a man called Yoshiaki Sato, where it’s called KAATSU. Sato realised the benefits of BFR when he broke his ankle skiing – a break which should have taken six months to heal, but with the aid of KAATSU, healed fully in only six weeks.

So how to take up this potentially muscle enhancing practice?

It’s as easy as it sounds: wrap a strap or piece of material tightly around your upper arm. This will restrict the blood flowing to your bicep. You then, with a much lower weight than usual, perform as many bicep curls as you are able to.