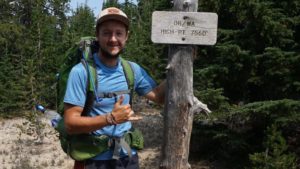 Looking for a fitness challenge in the name of a good cause? Take inspiration from Harry, who trekked from Canada to Mexico in the name of prostate cancer

23-year-old Nottingham Trent graduate decided to push himself to the limit and embark on the 2668.8-mile Pacific Crest Trail from Canada to Mexico in July this year. Harry was inspired by his partner’s father’s ongoing battle with prostate cancer. He successfully completed his trek on the 25th October.

En route, Harry encountered bears, mountain lions, and tarantulas. He also endured a heat wave in North California, with temperatures reaching 40 degrees and not a drop of water nearby, which almost forced him to quit. He also hiked across the Sierra mountain range summiting Mt Whitney and ambled across the Mohave Desert.

Harry’s partner, Beanie Merson, hiked with him for a month. On the first day, they covered a gruelling 26 miles and a monumental climb, and that evening after inspecting and popping several of Beanie’s blisters, Harry popped the question and asked if Beanie would journey with him for the rest of their lives, to which she said yes.

Harry said: “I have always had a huge love of the outdoors thanks to my upbringing. My parents always encouraged me to play on my bike or climb trees, and as I got older my taste for adventure just kept on growing. Ever since I thought about the Pacific Crest Trail I wanted to do it for charity.

“I chose Prostate Cancer UK as my future father-in-law, Charlie, has been battling this disease since 2011. However, despite this ongoing battle, Charlie still manages to live life to the full and make the best of a bad situation, which is truly inspiring and is what motivated me to finish this trek and raise as much money as I can. The support of my family and fiancé has also been incredible. I couldn’t have got through the dark times without them.

He added: “After finishing the walk, I was excited to come home and overjoyed that I had accomplished it, however, I also felt a strange sense of sadness that the adventure was over. I am over the moon with how much money has been raised so far and I plan to keep my just giving page open until December 3rd, in the hope of raising more money for Prostate Cancer UK. Now I am back home, I can’t wait to embark on my next adventure with Beanie.”

For a worthy cause

Charlie Merson, Harry’s future father-in-law, said: “I am honoured and delighted that Harry decided to raise awareness and funds for Prostate Cancer UK with this enormous challenge. As someone who has been going through prostate cancer for many years, I understand the importance of spreading the message of this terrible disease. I am even more pleased that he has decided to become my son-in-law. As a keen walker, my only regret is that I was not able to walk part of the trail with him, but I was always there with him in spirit and I am truly proud that he has completed this remarkable journey.”

The substantial sums raised by Harry will help ‘shift the science’ and crack the three core issues of diagnosis, treatment and prevention, which have been left unsolved for too long. It will also help provide support and information to those affected by the disease, like Charlie and his family.

Many people are unaware that prostate cancer is the most common cancer in men. It’s a huge issue that cannot be ignored. One man will die from prostate cancer every 45 minutes in the UK. That’s over 11,000 men a year. Based on current trends, if we ignore prostate cancer and do nothing, this number will rise to over 14,500 men a year by 2026.

James Beeby, Director of Fundraising at Prostate Cancer UK, said: “It is truly inspiring that Harry decided to take on such an epic challenge on behalf of what his future father-in-law has been through. We are so grateful that he decided to fundraise for Prostate Cancer UK. It is such a generous gesture, one that will help us make prostate cancer a disease that the next generation of men do not fear.

“So, whatever you do together, big or small, you’ll be helping us push for real change, from more effective testing to better treatments.”

Harry plans to auction off some of the stunning pictures he took during his trek to raise further funds. You can still sponsor him via: https://www.justgiving.com/fundraising/harryfirth

If you are inspired by Harry’s story and would like to take part in an incredible challenge or take on one of the seven regional 2018 March for Men walking events go to: https://prostatecanceruk.org/events