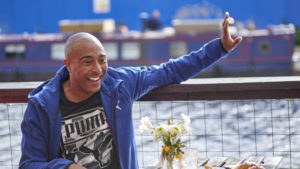 Colin Jackson is a man known not only for holding two world records, but for his contagious enthusiasm and inspiring presence. HFM went to speak with the athletic legend a day after his meeting with fastest-man-on-Earth, Usain Bolt. Former sprint and hurdling athlete Colin Jackson speaking at the PUMA Bolt Street Art Run said about his meeting with Bolt…

It was great. Obviously seeing him in such good spirits, which for me was really important; you’re coming to your very last competition, and he genuinely feels like he’s celebrating the whole of his career. So it’s lovely to see.

Q: For yourself looking back, what is the proudest moment of your entire career?

Do you know, that’s always really difficult to answer. And yet bizarrely enough I think it probably was the World Junior Championships, way back in 1986, because it was the start, and having the pressure of being a favourite for a title, and then winning it your very first time, kind of sets you up for the whole of your career, because now you have that sense of belief. So, you know you prepared well, and you performed – you didn’t bottle it or do anything like that, you actually went out there and deliver the performance – and so for me that’s most probably both defining, and my best. 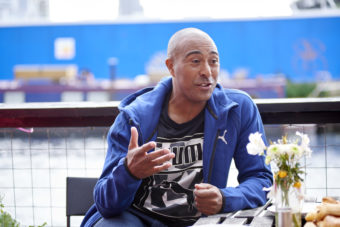 Q: You knew you could do it?

Absolutely, so you know you’re spot on, whatever happens you can absolutely perform in your actual territory, which is great; it’s a good feeling.

Q: How do you get yourself in the mind set to take on something like that?

When people say to me about performance, and “How did you feel?” I always say to them “Can you remember what it was like doing a school sports day? And when you lined up for whatever you do, how your gut was feeling, etc etc.” Its exactly the same feeling you have when you go out to compete in major championships – because it’s a feeling, it’s emotion, you actually can’t crank it up, or turn it down! So as it is, is as it is.

I think everybody’s kind of felt those nerves and those anxieties at some stage in their life, and that’s exactly the same, any top performer does. And when you go into a competition and you haven’t got that feeling, then you start to worry, because it really doesn’t mean this much to you anymore. So it’s that stage that you’ve got to think about hanging up the spikes, or putting away the football boots or putting away your cricket sets.

So yeah, it is that real feeling of *exhales* ready to go. The magnitude of the event doesn’t matter- if you have a passion for it, and you care about it, it’s the care in your performance which gives you the anxiety and the nerves – cos you want to do well. When you don’t care about anything, or a specific thing I should say, then you never have that feeling. You just rock up and you just do. So you know, most top sportsmen, and women, when they wanna do it, those nerves are there.

Q: What made you take running so seriously?

Well, I was good at it, I think – that’s what kind of cranked it up in the end. You don’t really know how good you are at the beginning, even when you’re winning medals at a young age, you don’t really know, because for me it’s a thing I was just doing, so I really didn’t pay that much attention to how good I could possibly be.

It’s only when all of a sudden people around you are saying – and put expectation on you to perform – that’s when you think ”Hang on a minute, well I am pretty good then, if they’re expecting me to deliver a performance, they’re expecting me to win a race”, then you realise “Well I must be half decent”, because if people are having expectations, they know their stuff, and so that’s when a little bit more pressure gets cranked on you, because of other peoples’ expectations, not your own.

Q: Have you felt like you’ve been able to deal with that pressure well? Has it driven you on?

Yeah, I think one of the things to do… external pressure’s really hard, so I say you’ve only got to kind of manage your own pressure. So you’ve got to deliver on your own personal expectations. Don’t listen too much to people around you, in that sense, cos they’ll just add pressure on. If internally you say “This is what I should do, this is what I’m expecting of myself, and I will deliver no less than that”- and sometimes it could just be a silver or a Bronze medal, doesn’t mean you’re having a defeatist attitude. Actually in my opinion it means you’re being very realistic.

You know – there’s no point saying “I’m going to be a gold-medal winner here” and you’re the sixth best in the world, well what’s the chances? You’ve got five people to fail before you do. So it’s that real individual expectation you put on yourself; you put the pressure on, and that allows you to deal with it in the best way possible.

Q: If you hadn’t become a runner, do you know what you would have done otherwise?

I still would have done sport, I still would have played for my life. Cricket was my sport, I loved cricket. When I was young I was lucky enough that my family used to watch a lot of cricket, West Indian cricket was pretty strong at that time as well. And luckily round my grandparents’ house, my grandad used to invite a lot of the big West Indian cricket players. So they used to be in the house, so you used to see them. You’d be, “Ah, I wanna be like these guys, they seem pretty cool”. So yeah, cricket was my sport.

Q: What advice do you have for people starting out in athletics?

For me, it was all about fun really, and I always say that to youngsters – only do things that you can really have fun and enjoy doing. Because if you can have fun at whatever you do you can work hard at it, because you enjoy the environment you’re in, you challenge yourself every single day because challenging yourself becomes fun, you know, second nature. So for me it’s whatever you do, it has to have an element of fun involved, otherwise, what’s the point? 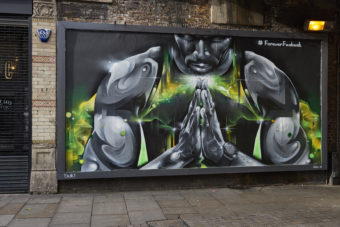 Former Welsh 110m hurdler Colin Jackson was speaking at the PUMA Bolt Street Art Run.  To celebrate Usain Bolt’s career PUMA commissioned a series of street art murals around London that were revealed today ahead of the World Championships. To find out more about PUMA’s celebration of Usain Bolt’s career search #ForeverFastest and visit the PUMA store on Carnaby Street