England Rugby Sevens puts HFM to the test
May 4, 2017 by Tom Rowley 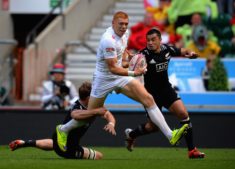 With Rugby Sevens just around the corner, HFM visited the England players for a training session, where we were really put to the test. The team put us through some gruelling strength training and endurance tests.
See the video below.

Support the HSBC London Sevens at the World Series finale, ‘Feast of Rugby’ at Twickenham on Saturday 20th & Sunday 21st May 2017. Tickets start at £30 and are available here.

For the full Rugby Sevens interview check out the Healthy For Men July/August issue in Holland & Barrett for just £1.99.