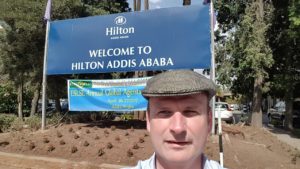 If the cap fits, wear it, as the saying goes. And thanks to Phileas Cap, a new fundraising project, you soon might. Inadvertently devised by avid cloth-cap wearer Tony Bramley and friend Richard Armitage, the mission to take a well-worn flat-cap on a rather unique journey is well underway.

The fundraiser began as a joke by Tony. After his diagnosis with late stage melanoma, followed by the discovery the cancer began on his head, the accidental fundraiser became well known for telling friends and acquaintances they should cover up in the sun – and even handed them his ‘treatment cap’ as a gentle reminder.

During his travels overseas, naturally Tony look his trusty cap with him – and after word spread via the online grapevine of Facebook, he started fielding enquires asking whether his beloved ‘Phileas Cap’ wanted to undertake a unique around the world journey of its own.

With donations given to Melanoma UK in exchange, the world’s most increasingly well-travelled hat began its worldwide adventure – stopping off in Chile, Argentina, New York, the Canary Islands and Ethiopa so far. The cap is about to depart for China, where it is no doubt looking forward to seeing the sights in Beijing. With no time to recover from jetlag, Phileas will then depart for future trips to the Scottish Highlands, Spain, Dubai, Singapore, Borneo, Malaysia, Kenya and Canada – not to mention additional trips exploring the northern states of the US and a return once more to the Canary Isles.

Thanks to friend and ‘hat booker’, Richard Armitage, the project now has its own JustGiving page where the hat’s temporary guardians can upload pictures of Phileas’s travels and donate to this fantastic cause.

Over the last 25 years alone, the latest statistics show that rates of skin cancer in Britain have risen faster than any other common cancer. Melanoma UK exists to spread awareness of skin cancer causes, while providing support to patients and their loved ones during their diagnosis and treatment.

With Phileas Cap, there’s now a way to spread the word about the importance of sun safety whilst celebrating the very best things in life – fun, friendship and of course, travel.

For more information and to donate to Phileas Cap please take a look at the Just Giving page for the project.