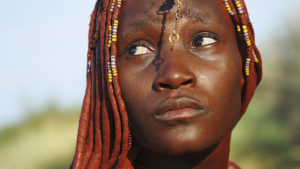 Over the past few million years, most of us have progressed from crawling around smelling arses like our chimp brothers and sisters. But we still retain a huge amount of biological hardwiring and often what we do to improve our sexual chances plays to these hardwired signals. We all have to work hard against the modern diet to keep our bodies looking healthy and attractive. Men are attracted to body shapes which subliminally suggest the best chance of breeding (notably the hourglass 70 per cent waist-to-hip ratio) while for women, men with rugged features suggest a good supply of testosterone.

Anthropologists studying the huntergatherer Hadza tribe in Tanzania revealed that men with deeper voices fathered more children than those with higher-pitched voices. It seems logical – deep voices indicate a higher testosterone level in your blood.

Even the smells we emit, pheromones, can affect our chances. Researchers have recently discovered that women’s menstrual cycles adjust when exposed to the scent of a male underarm, while both sexes use fragrance to motivate their prospective partners desires, with some effect. A study in the journal Physiology & Behavior showed an unnamed chemical in women’s perfume appeared to increase intimate contact with men.

While people in different cultures agree among themselves which faces are attractive, it seems there are hardwired components, universal characteristics, that scientists say unite us in our perception of beauty: symmetry of features, proportions and placement of facial features, and profile.

Within tribal life, individuals with scarred or misshapen faces may be advertising their proneness to disease or an inability to take care of themselves. Therefore, a beautiful face was often seen as a truthful sign of good health – something that all the beauty companies and cosmetic surgeons of our modern world have been trying to replicate.

But the specifics of beauty are as old as the hills and remain rooted in cultural programming. The Nina of Nepal see love only in terms of ‘beauty rising from the heart’, but of all the remaining indigenous groups, the Himba – one of the last seminomadic pastoralist cultures of Southern Africa – spend the most time on beauty. Every morning Himba women spend several hours rubbing their entire bodies with a cream of rancid butterfat and ochre powder, perfumed with the aromatic resin of the omuzumba bush. This gives their bodies an intense reddish shine. The Himba consider the body like the face – essentially neutral, or like the sheet of paper on which their culture is written. The Himba believe that their face, their bodies, their culture and their environment are all intrinsically linked.

So men, listen up. Smell raw, speak deep, and rub your women in rancid butterfat. And watch out for the trickery of make-up. The red pigment on a woman’s cheeks is an old ruse to give the impression of blushing – an act often associated with sexual attraction or the physicality of sensation.
And next time you kiss a lady wearing lipstick, remind her that it probably contains fish scales, as it did thousands of years ago. Happy hunting.