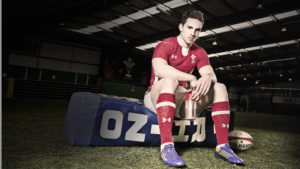 Two-and-a-half years on, there is no stopping the 6ft 4in, 17st North. He helped Wales to the World Cup semi-final in 2011, a Grand Slam in 2012, and another championship win. It comes as no surprise that he already has a super-human reputation, and an almost mythical status in Wales. There has even been reference to him on the internet as an 8ft giant being carried by nubile young women into a banqueting hall on a golden throne.

The irony is that North himself has felt fallibly human. He had shoulder surgery preceding the Six Nations in 2011; he has been hounded in restaurants when Wales lost form after their Grand Slam in 2012; and then he faced every rugby player’s nightmare earlier this season – a neck injury scare, which kept him out of the start of this year’s Six Nations.‘Yeah, it was my scariest moment,’ he tells HFM. He was carried off in a neck brace during the Welsh game against Ulster in January. ‘But I had a great medical team at the Scarlets getting me back on track.’ The attritional nature of the professional game means this is typical of a rugby union career. As North knows too well. ‘Injuries are part of the modern game, everyone is bigger, stronger and faster. The impacts are huge and, of course, if you don’t play fully committed you are more likely to get hit down and injured.’

Watch this emotive video with the rugby legend about preparation and commitment, sponsored by Gillette.