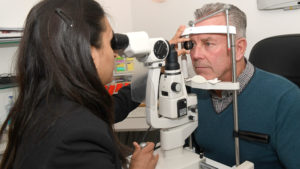 Vision Express have teamed up with the International Glaucoma Association (IGA) to raise awareness of the importance of eye tests during World Glaucoma Week 2017.

Glaucoma is a group of eye conditions in which the optic nerve is damaged where it leaves the eye, resulting in misty and patchy vision and a gradual loss of sight. It is one of the main causes of sight loss globally, affecting 64 million people worldwide and 600,000 Britons.

Research shows that 300,000 people are living in the UK with undetected glaucoma, many of whom don’t realise that an eye test is the only way to detect the condition. Glaucoma is one of the biggest causes of preventable sight loss, yet 31% of people are unaware that glaucoma runs in families – and 72% of those in at risk groups don’t realise they are at an increased risk.