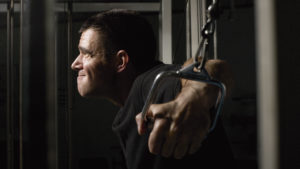 Building that sculpted body can seem to take hours and hours of hard work in the gym every week – but what if there was a much quicker way to get the job done? High Intensity Training, or ‘HIT’ – a little backwater of weight training – is rapidly growing in popularity with its promise to take hours off your gym time and add inches to your biceps. But what is it – and does it work?

What is it?
In a nutshell, HIT involves using very few sets but a whole lot of effort to squeeze the same amount of muscle-building stimulus into shorter workouts, leaving much more time for recovery and, hopefully, growth. The focus is quality, not quantity.
HIT plays with the ingredients of your weight training to get the most out of your reps. There are many things you can change about your workout – you can vary the amount of weight you put on the bar, change the total sets and reps – the total ‘volume’ – and alter the number of different exercises you use to target each body part. Added to these three, there is also the speed, the time between sets and the frequency of training. All these are your variables. HIT seeks to play with these to find the optimum amount of stimulation for muscular growth in the minimum number of sets and minimum total volume. More growth, less time training.

A brief HITstory
HIT dates back to the late 1960s. Arthur Jones, a gym equipment manufacturer in the States, embarked on a series of experiments using his specially designed ‘Nautilus’ weight machines. He recruited a variety of test athletes using hellish training sessions comprised of as many as 16 single all-out sets per session, using 16 different movements. The workouts were repeated every few days for weeks. The sessions were so tough many could not run the course, but those who did had some surprising results, with participants gaining huge amounts of muscle – as much as 20lb in the space of weeks – and HIT was born.
Despite its early success, the system was still confined to a few hardcore athletes. It took champion bodybuilder Mike Mentzer to popularise the training method during the 1970s. At this time, most bodybuilders were using high volume training programmes, but Mentzer was different. A busy man with little time to train, he started experimenting with HIT methods, eventually creating his own – ‘Heavy Duty’ – and interest in his methods increased. Even Arnold Schwarzenegger himself started working with Arthur Jones.

Too much of a good thing?
In the early days, Schwarzenegger used eight or more training sessions a week to hone his physique, with each session lasting an hour or more. This ‘high volume training’, is still popular and involves using lots of sets and different exercises for each body part – the idea being to breakdown as much of the muscle fibre as possible. It is timeconsuming – and the potential problems don’t end there. The ‘law of supercompensation’ states that when you break a muscle down using weight training, it bounces back stronger. This is why we use heavy weights to stimulate the muscle to adapt by getting bigger and stronger. The ‘stimulation’ takes a decent level of weight or resistance and the ‘adaptation’ takes time. HIT devotees – or ‘HIT Jedis’, as they’re known – argue that the long, demanding sessions seen in high volume training not only mean you can’t use heavy enough weights for much of the session, they also demand too much from the body, hampering recovery. With its emphasis on quality not quantity, HIT apparently solves these problems.

‘Stimulate, don’t annihilate’
When building your body there are two big factors that count, ‘stimulation’ and ‘adaptation’. Without either of these you won’t get growth – stimulation of the muscle using weight training leading to the adaptation, which in the case of bodybuilding is growth. It’s a balancing act, and if you overstimulate then you can’t recover sufficiently between sessions to bounce back and grow well. The folks who developed HIT, like Jones and Mentzer, argued that the long high volume sessions take too much 20 HEALTHY FOR MEN SEPTEMBER/OCTOBER 2010 out of the body, which leads to over-training – which leads to decreased muscle growth and possible ill health.
Another argument used is the variety of exercise – in medium or high volume plans you use multiple sets of the same exercise; for example three sets of bench press. HIT Jedis argue: ‘Why use three sets of one exercise when I can use three different exercises – each for one heavy set – and stimulate the muscle in three different ways?’ Again, this argument hinges on stimulating growth as opposed to beating up the muscle completely.

Intensity versus effort
‘High Intensity Training’ is something of a misnomer. ‘Intensity’ in a weight-training context refers to the amount of weight being moved. It is defined as the percentage of your ‘one rep max’ – in other words, the percentage of the weight you can shift for one rep with good form. HIT generally involves sets of 8-20 reps and as such isn’t ‘high intensity’. In sports science terms, an Olympic weightlifter doing a clean and jerk at a weight that he can lift maybe once or twice is considered ‘high intensity’. Indeed, many of the more common muscle-building routines would be more accurately described using as ‘moderate intensity’ – and HIT is the same. As far as HIT goes, ‘intensity’ really just means ‘effort’. We all know that effort in the gym is important, but with HIT this is a basic necessity.
Muscles contain two main groups of fibre – the ‘slow twitch’ fibres that are responsible for prolonged bouts of effort but don’t have a good capacity for growth and the ‘fast twitch’ fibres that, in contrast, have a great capacity for ‘hypertrophy’, or growth. Fast twitch fibres can kick out more horsepower, but over a much shorter time period. This is why muscle-building exercises take short, higher intensity efforts.
If you take a closer look at a contracting muscle in a lab, you’ll see that no matter how heavy the weight used, not all the muscle fibres are firing at once. This means you’re not using all your muscle for each rep, which has implications for the number of reps you need to complete to use enough of the fibres, and the weights you use.
So, if we use very heavy weights for a few reps we might become strong, but the volume won’t target enough of the muscle fibres. On the other hand, if we use too light a weight then we can do plenty of reps, but we’re not targeting the right muscle fibres. The secret is to use pretty heavy weights, but get more reps than you thought possible!