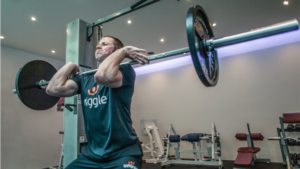 He’s Jason Kenny, the English track cyclist who retired, hit the gym, and then got back on the bike. We look at Jason’s gold medalist workout, and see what it takes to become a cycling champion. It’s all in the squats, cleans, and deadlifts! 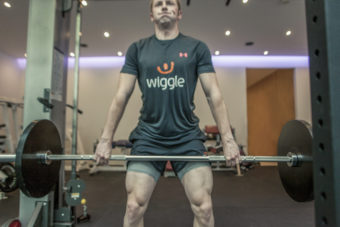 You recently said that you have reversed a decision to retire from cycling – why was that?

When you went out onto the track at Rio, did you think that was probably going to be your last race?

Yes, definitely – at that level for sure. I’d told myself “this is my last World Championships event”, which I then went on to win. Same with the Olympics; I was pretty serious about walking away, and when I was looking at future careers, I was really serious.

And so what was it that made you reverse your decision?

I just started enjoying it again really. I kept on exercising and there’s lots of things I wanted to do. I wanted to exercise in different ways and so that’s what I did. I went swimming, long walks with the dogs, running. But it turns out I’m rubbish at running. I just went out and enjoyed riding my bike.

I started doing more gym work as well because I always thought that the gym wasn’t really for me. But as soon as I stopped and started doing what I wanted in the gym, I really enjoyed trying different things. Before I knew it, I was reverting to what I was good at, which is more sprinting, squats and things like that. I was then half way back to training and really enjoying it.

Has the birth of your first child had a part to play in that?

Not really, because this happened while he was still in the oven. It was just a process that I went through. The thing is, I’ve never really had more than two weeks off before and even when I’ve had time off I’ve never really switched off. I’ve always been thinking about training and conditioning.

Whereas this is the first time that I’ve stepped away and just thought ‘that’s it now’ and just got on with the rest of my life. And I think I just needed that refresh. 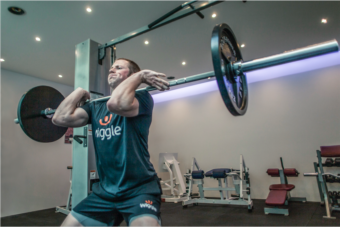 Tokyo 2020 is still three years off but do you fancy your chances of adding to your medal tally?

Every Olympic cycle gets harder effectively, you can’t do the same again, if we turned up with the same form I had in Rio, it won’t be enough to win. So you always have to be four years better and move on. So it will be difficult for sure.

The questions on everybody’s lips, with the news that you’re reversing your decision, are you looking forward to becoming Sir Jason at anytime?

I’m not sure, I don’t really think about stuff like that to be honest [laughing]

How important for a track cyclist is conditioning to compete at that elite level?

The gym’s really important. If you just train with what you want to get good at, you’ll very quickly get to a level and find that getting better is really difficult. We’re at a level now where we spent years and years banging our heads against a brick wall trying to get little bit faster. The gym’s one of those supporting things that you can put in to boost your strength and your conditioning to hopefully push you on and go a bit quicker. It’s good for general health and injury prevention because what we do is very much in one position on the bike – lean forward and never stretch our legs out. So it’s good to get in the gym and do the complete opposite and reset that, as well for your general wellbeing.

How long do you spend in the gym each week?

I go in the gym two to three times a week. It’s changed over the years, I used to go and do epic sessions and then I striped it right back and just did key lifts and now I’m somewhere in the middle. I’ll go in and I don’t mess about, and I’ll be in there for an hour and a half maybe from start to finish just don’t faff about- get warmed up, get lifting, get a bit of core done and get out. I’ve found that’s the best way to do it. 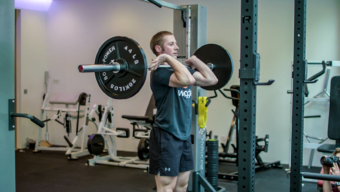 It’s a very northern attitude to training isn’t it, not faffing about and just cracking on with it…

Yeah that’s it, it’s changed over the years, I used to do epic sessions but I find, you just get good at training and for us the gym’s all about supporting the bike. You want to get the most out of it, as efficiently as possible.

I’m assuming that leg day’s the best kind of day for you. What kind of exercises should cyclists be doing to improve their cycling?

Legs power you on the bike so we don’t do much else. I don’t personally because nothing on my arms is going to make me quicker on the bike. It’s just going to make me heavier and less aero so I don’t do anything but legs and core. I do all the basics – leg press, squats and core stability, it’s just about trying to be as efficient as possible and putting that power down.

Which do you prefer, the track or the road?

I’m better on the track for sure, competing wise, definitely on the track. There’s nothing better than going out on a nice day and riding round the lanes and having a nice café stop with your mates and things like that. But when it comes to racing and getting serious and going fast, you can’t beat the track.

[Laughing] Not me for sure! A lot of the guys on the squad are really strong at the minute and they squat well over 200kg, around 220-230 quite easily. I’m not sure who’s got the record.

How does that transition into power on the bike? If you can squat more in the gym, does that not necessarily mean that you’ve got a bigger power output on the bike?

You’d think so wouldn’t you, there’s no doubt about it, but thank god it doesn’t otherwise I wouldn’t be very good on the bike. In theory it should do, it certainly increases your potential to use power on the track if you’ve got that underlying strength. But it’s about how you can coordinate it as well on the bike, which some people are just more efficient at than others at. 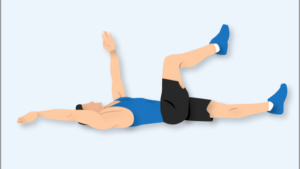 Master one move: the deadbug

This move is a fantastic workout for your core strength, and requires no equipment so you can do it anywhere. It works the erector spinae, obliques, rectus abdominis […]