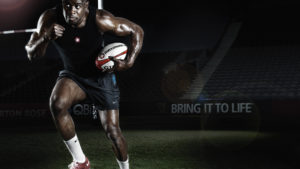 The England Rugby Sevens players are true titans. With the games beginning a couple of weeks, we’ve gathered some top advice from the pros. So if you’re looking to boost your tackling and passing skills, HFM is a great place to start.

For strength, coaches use heavy weights and slow reps, with moves like back squats and deadlifts. Then for power, they drop the weight to do much faster move sessions, such as power cleans and clean pulls, 5m acceleration reps, and plyometrics such as single-leg jumps, bounds and explosive exercises.

pro tip: work side by side ‘We aim to cover all bases: we do a strength component first, then a more power phase closer to the game. We have core lifts within a bilateral and unilateral approach – so one double-leg routine and another single leg to limit injury,’ says Huw Bennett, former player and Wales strength & conditioning coach.

The food formula Players eat 3000-6500 calories a day, ensuring a correct balance of protein, carbs and fats over four to six meals, with a ‘double-fist portion’ of protein in each – that’s 40g of protein, and 50-100g of carbs per meal.

Pro tip: use shakes ‘It can be tricky to eat straight after training hard, but we need to get calories in. So we have supplements for our recovery, as they’re easier to digest,’ says Wales flanker Dan Lydiate.

Super-charged circuits Wales’ strength and conditioning coaches up the ante with their power endurance circuit training sessions. Rather than exercises with 30 seconds on, 30 seconds off, they increase the intensity and decrease the duration of rest time all the way down to a 10 seconds-on, 10 seconds-off pattern. This makes the workout more effective because you can repeat a higher intensity effort and generate more power.

When it comes to converting fitness and conditioning built in the gym to matches, Wales focus on training that mimics real-world rugby movements, for instance around a ruck. You never see a barbell on the pitch so they work on the repeatability of these moves, with power. A ruck may last five seconds, but the effort from players has to be 100% for that time.

Pro tip: stay active when injured ‘I always find a way to stay active when I am injured. Some people hear the physio saying “Don’t do this and don’t do that,” and end up not doing anything, but I find a way. A lot of boys come back from injury with their body fat a bit high or they find they’ve put on a bit too much muscle. I’m always one to look after myself so I feel fit when I come back,’ says scrum half Rhys Webb.

Performance: Do the hard work

The psychology at Wales Rugby is ‘hard work’, pure and simple, and that extends to preparing for match pressures. The coaches test the players’ fitness with sessions like the Watt running test, which is 10 efforts of 20 seconds flat-out, with 20 seconds rest in between. ‘It’s tough – the first five are OK, and then your legs just start to fill up so you have to dig in and get it done. Then we go straight into the intensity rugby session to work on producing these skills under pressure,’ says Webb.

Playing to your strengths

‘I’m quite lucky, I’ve always naturally been my size, so it’s about maintaining that and it comes down to game management and decision-making,’ says Webb. ‘Obviously, the other players are getting bigger and stronger, so I have to pick my moments when to run. I don’t want to run into the biggest player on the pitch or kick to the best player in the other team.’

‘If you push yourself during training then there are moments in games where you are tested, and that mental strength comes in. It’s the will to play for the guy either side of you and not let your mates down. It gives you resilience,’ says full back Leigh Halfpenny.