With all the extra time spent at home this year, many of us will have been inspired to dust down that old guitar from the loft for some self-administered music therapy. It should have been the perfect chance to brush up our playing, or learn a new instrument. In reality, for some, the urge to play was blocked by other feelings. It’s easy to think that music lessons are something you only do as a kid. Or that, if you did have lessons , your level of competence is set in stone at the point where you stopped.

In fact, there’s no reason you can’t take up a musical instrument, or continue to learn one, as an adult. Not only does playing offer a sense of accomplishment, it’s positively good for you. A recent poll of 2,000 instrument-playing adults by music streaming service Spotify found 89% believe music helps keep them emotionally balanced. Over half said it makes them more relaxed, and 36% say playing an instrument gives them a sense of purpose.

Now, with a wealth of online resources on offer, it’s never been easier to start learning. All of which means you can rekindle those fantasies of being the next Ed Sheeran…

Go with the flow

Enjoying music in general has a therapeutic, emotional dimension. As the British Association For Music Therapy says: ‘Music can be exciting or calming, joyful or poignant. It can stir memories and powerfully resonate with our feelings.’ However, playing an instrument has a more immersive quality than simply listening. It counts as a ‘flow’ activity: one where you’re so engaged, you don’t think about anything else. ‘Playing is very mindful,’ says Julie McKee, a piano teacher and jazz singer (juliemckee.com). ‘You can’t think about other problems when you’re working out how to play a piece, or where to put your fingers.’

If you struggle with meditation, it could even offer an alternative. ‘You don’t have to make such an effort to get into another zone – you just do,’ says McKee. ‘It can also help if you’re feeling anxious, as it takes your mind to a different place. Playing an instrument also has a physical element, so you’re engaging more of your senses in a constructive way.’

Research certainly suggests that playing an instrument promotes better mental health, and not just for younger people. One 2016 study found participants aged 65-plus who played the piano reported ‘improved self-esteem, greater independence, and fewer feelings of isolation’ compared to a non-piano-playing control group, and saw
a ‘decrease in depression, and fatigue’.

No surprises, then, that music is used therapeutically – creating and enjoying music can be used to support people with mental health issues, or learning or developmental disabilities. ‘Music therapy has been found to demonstrate improved social and psychological functioning for adults with depression, and help with anxiety and trauma,’ says Clare Maddocks, a music therapist and spokesperson for the British Association For Music Therapy (bamt.org). ‘Structured musical participation can help people build resources to manage these conditions, and provide a creative outlet for expressing emotions.’

Learning an instrument boosts self-esteem, she adds: ‘We can experience positive feelings when we finish learning a piece, and play alongside others. Music helps motivate us and gives us an achievable goal.’

Practising those chords might improve your memory, too. ‘When we take part in a musical activity, multiple parts of our brain are engaged,’ says Maddocks. Studies show playing is good for cognition, and associated with a reduced risk of developing dementia. While people who’ve played from childhood have particularly protected cognitive function, a 2018 review of studies suggested adult learners still gained benefits.

And let’s not forget the physical pluses. ‘Playing engages your fine and gross motor skills, and your respiratory system if you’re learning a wind instrument,’ says Maddocks.

Learning as an adult

So what’s stopping you from booking those lessons? You might have heard the idea it takes 10,000 hours to master an instrument (proposed in Malcom Gladwell’s 2008 book Outliers) – a daunting prospect if you’re struggling with a busy life. You might have internalised the idea, from childhood, you’re just ‘not musical’ – in fact, neuropsychobiological research indicates everyone is.  While it’s true that children’s brains are wired to learn quickly, McKee points out adult piano players, for example, may have the advantage of stronger fingers.

However, McKee says perhaps the biggest hurdle for adult learners is self-doubt. ‘People might have reached a level of competence in their career. They go back as a pupil and want to be as good as they are in other areas of life. But thinking “I’m not good enough” can get in the way of enjoyment. You need to combat that.’

McKee also argues that, as a society, we don’t always value doing something that isn’t ‘useful’. ‘We can have quite a utilitarian approach to life. But the arts aren’t just quite a nice thing to have. They’re part of life. For me, playing was a lifeline during lockdown.’ Think of playing as an act of self-care, says Maddocks. ‘Music gives us a break from the chaos of day-to-day life.’

There’s no reason why you can’t take up an instrument at any age, if you’re prepared to put in a little work. McKee suggests aiming for 10-15 minutes’ practice a day to see progress. ‘Little and often is better than a big splurge every two weeks. But anything is better than nothing.’

Even if your skills are limited to strumming the first four chords to ‘Wonderwall’, you’ll benefit. ‘You don’t have to be concert level to get something from playing,’ says McKee.

The good news is, it’s never been easier to learn. Many teachers have switched to online lessons, making them easier to fit in (search at musicteachers.co.uk). Flowkey offers interactive piano lessons (flowkey.com); Fender Play has guidance for guitar players (fender.com); Music Professor for brass and woodwind players (musicprofessor.com).

If you’re a total newbie, consider which instruments you’re drawn to. Anecdotal evidence suggests the ukulele, guitar, harmonica and piano are easier for adults. The French horn might be more challenging.

Other factors might affect your choice, like physical space – we don’t all have room for a double bass. There’s also the social element: do you want to join an orchestra, or play alone? But the most important thing is to love it – apart from anything, you’ll practise.

For more expert mental wellbeing advice, check out the latest issue of Healthy For Men, on sale now in Holland & Barrett stores and online at hollandandbarrett.com 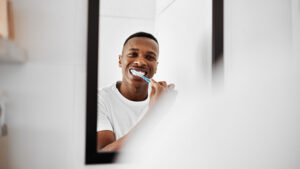 How brushing your teeth affects your overall health

Healthy teeth and gums lead to greater overall wellbeing. Here’s why you should never brush off the benefits of dental care When we talk about dental health, […]