The Hero Maker: PT of the Stars, David Kingsbury
February 20, 2017 by Tom Rowley 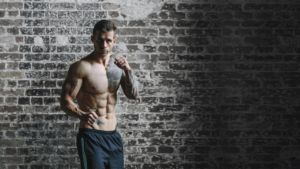 There’s only one way to find out how actors get in super hero shape: speak to David Kingsbury, the man who trains them.

Heroes aren’t born; they’re made. At least that’s the case at a small, unassuming building at the back end of the car park at Pinewood Studios, just outside London. The walls are stained white. The carpet is dated. People idle by en route to cars, paying no mind to a glorified gatehouse that blends into the background. Yet this building is a factory for fame to those in the know, and what it’s produced is of epic proportions.

HFM is standing in David Kingsbury’s gym. But it’d be more accurate to call it a superhero production line. Through its doors walk actors set to be the next comic book action stars. Out strut men with bodies built to live up to the fantasy physique proportions of X-Men, The Avengers or Assassin’s Creed comic book and video game heroes and villains. Few actors are worthy of cloaks and spandex until they’ve undergone Kingsbury’s crucible within these four walls.

As a PT, his CV reads like a who’s who of action cinema. It was his gym behind new blockbuster murder-romp Assassin’s Creed. He’s trained the likes of the Norse godlike Thor and crotch-grabbing antihero Deadpool. 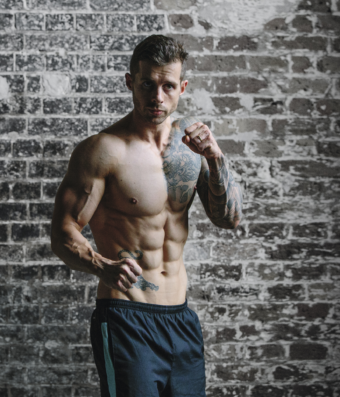 After a decade of experience as a trainer, and over half of that working for big budget movies, Kingsbury now cultivates superheroes like some sort of professor X of muscle. It’s a fraught task; nowhere else are your results showcased to the world as they are for PTs like Kingsbury. If you don’t make your client look like they’ll save the day, you’ll have millions of frothing fans vilifying you online. Not to mention an angry movie studio holding the purse strings in a Hulk-like grip.

But it’s all in a day’s work. ‘I’m confident in what I do,’ says Kingsbury as he shows us around. ‘Results come from two things, mainly: having a good plan and the motivation to follow it. It’s that simple.’

It’s an uncomplicated methodology that flies in the face of the men-in-white-coats techniques shoved down our throats by many fitness experts. ‘There’s no magic bullet. I make sure we have the best possible training and food programmes to deliver the results the client – and studio – want. That way, they don’t have to worry about anything and I can focus on keeping them motivated.’
If you’re the type of person who rants about this kind of thing in fitness forums, you’d be forgiven. The results for people like Jackman are so incredible as to seem untouchable. And, in response, when websites like The Daily Mail write up a transformation story, the trolls come out in droves. ‘I try to take it as a compliment,’ says Kingsbury. ‘It’s either accusations of photoshopping or claims that normal people can’t afford the kind of celebrity treatment and this kind of result isn’t possible.’ Of course, neither is true.

‘It’s sad, because it detracts from the amazing transformations these guys usually achieve. Plus, people just can’t believe that celebrities work hard, when the reality couldn’t be more different.’ Indeed, filming schedules are often so hectic, that Kingsbury and his clients are regularly found squeezing in short sessions before sunrise or between takes. ‘You’re battling late nights as well as long days.’ It’s not that Kingsbury thinks celebs have it harder than you, they just don’t have it as easy as you may think.

It was this that prompted Kingsbury to pivot with his business model. ‘Rarely do I have time to train regular people anymore. I’m either in the air or in the studio,’ he says. ‘But I want to show we’re not doing voodoo magic or changing bodies by throwing money at them. So I now train people online.’

He claims the results achieved are as good as those you see on the big screen. It’s a bold claim. But Kingsbury is quick to show a sceptical HFM his panoply of pictures showcasing clients’ transformations. And the stats are hard to ignore: at the top of the pile are numerous men with similar end measurements to those of Wolverine.

‘To me, this is the end goal,’ he says. ‘If you follow the same programme as my celeb clients, you’ll get the same results. Sure, we won’t meet. But you’d be surprised how many of the actors I work with have to train without me there. If you can find the self-motivation, these results are totally possible.’ This is because of the front-end focus of Kingsbury’s plans. ‘People often ask how come I’m the one who works with megastars when there are thousands of PTs out there. The answer is the planning I put in. Whether you’re an action hero or just some bloke who wants a six-pack for his wedding, I’ll bust a gut poring over your stats, your work-life balance, your diet and your lifestyle, before I go near making you a plan.

‘Too many programmes are a copy-and-paste job. You need something for your own physiology. Certain principles work for most people, but I want results of comic-book proportions. That’s my job.’

Despite the individuality of David’s plans, some principles remain consistent. Strength moves take centre stage: ‘You can’t make gains without progressive overload, which means lifting more weight with each new phase.’ Plus, a specific carb-cycling method that allows you to properly recover always features. ‘It’s unique to each client,’ he says. ‘But, generally, you’ll eat a lot of carbs on training days, less on recovery days, and hardly any when you’re trying to get lean.’ That way, you always have the requisite energy without a calorie surplus. Kingsbury stops short of rolling out the old ‘abs are made in the ‘Of course, certain principles work for everyone, but I want results of comic book proportions. That’s my job.’

A typical session begins with a compound lift – say pull-ups during back day – at strength training rep and set targets (5 x 5, for instance) before moving onto targeted moves at bodybuilding rep ranges (8 x 12) and finishing with bodyweight moves. ‘I also encourage clients to put in extra work for areas that don’t grow,’ he says. ‘A good example for guys is the chest. It’s often a problem area. I get around this by having them do 50 or so press-ups as soon as they wake up. Just get them done and it’ll grow.’

You can sample what a day on a Kingsbury plan feels like with the workout opposite. But it doesn’t stop in the weights room. ‘Most clients enjoy the variety in my training. Celebs often need to fight and face up to some major stunts, so we develop them in a multidisciplinary way. Which suits me fine.’

Fine indeed. Kingsbury was, for the majority of his youth and into adulthood, a pretty serious kickboxer, competing as far as the sport’s Mecca, Thailand. ‘Kickboxing is incredibly fun and difficult at the same time. It’s the perfect supplement to a weight-training programme, especially if you’re looking to get lean. And it’s not just aesthetic either – you’ll have power to show for your hard work, too.’

Back in the gym, Kingsbury is at his desk tweaking a plan for a client in Norfolk (looking to ‘turn his gut into a six-pack’ before his holiday). Fuelled by two espressos, he’s back on the road to meet a client from one of the biggest superhero franchises on the planet. Kingsbury isn’t so much operating on both sides of the fence as breaking it down and opening a gym. The two ends of his operation almost seem at odds. On the one hand, red carpets and red capes. On the other, men like you, looking to be in the best shape of their lives. But, somehow, Kingsbury makes it work. ‘Most men come to me because they want to look like an X-man,’ he says. ‘And it is possible. If you can match his intensity, dedication and drive, there’s no reason why you can’t build a body like Wolverine.’ More information at davidkingsbury.co.uk.