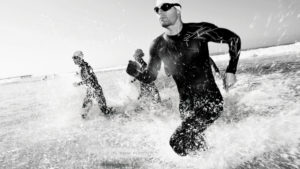 Whether you’re aiming to complete your first triathlon in 2019 or are looking to improve your times from last year, our experts have the inside knowledge to get you to the finish line, faster. We’ve assembled top triathlon experts and Olympic medal winners to give you the edge and make your tri as easy as one, two, three

Breathe both sides. You don’t really need this skill in a pool but in windswept, choppy open water, it’s invaluable to be able to breathe away from the waves. ‘Breathing two to the left, then two to the right will help with balance and symmetry, but isn’t quite as demanding as trying to learn to breathe one to the left, one to the right. By increasing your body’s rotation, you’ll open up the window of opportunity for a decent breath of air on each side,’ says swim coach Dan Bullock.

Break it down. Olympic distance triathlons have swims of 1500m, which sounds like a lot, but before you head down to your local pool to grind out 60 lengths, know that triathletes don’t train like this – they break the distance into chunks, and swim those faster than they could swim 60 lengths, to lift swimming fitness, faster. ‘Breaking a session into repetitions of 50 or 100 metres with 20-30 seconds rest works well,’ says Tom Sturdy, former pro triathlete. Keep the pace up and even try to lift it at the end of the session.

Get good feeling – no, this isn’t some hippiefied chakra thing. Learning to feel how your body is moving through the water during the front crawl is key to a smooth, powerful stroke. ‘Most people try to pull the water, rather than pressing on it. The real way to swim is to create leverage by pressing on your forearms and hands and getting your body over the top of it. The more leverage you have, the more power you get,’ says Richard Stannard, tri coach and ex-pro.

Stay on track. Swimming in a straight line is obviously the optimal way to race but in murky openwater there’s no bottom line to follow. So learn how to ‘sight-breathe’ above the water during training. ‘You can do a set where you lift your head, not your shoulders, and look forward every four to five strokes while breathing. Alternate lengths of normal and sight-breathing,’ says tri-expert and author Mick Finch.

Get aero. Triathlon cycle legs are often flat and the ‘no-drafting’ rule means that it’s a solo time trail. That means aerodynamics are king. ‘Nearly 80% of a riders’ effort goes into forcing the air in front of him out of the way,’ says Phil Burt, head physio at British Cycling. ‘And, if you break aerodynamic drag down, the bike only accounts for 20% and the rider on top of it 80%.’ So fit tri-bars to your handlebars to train and race in an low aerodynamic
position. But make these changes gradually to avoid lower back pain.

BRICK it. Regular triathletes dread the ‘jelly leg’ that can strike after the cycle-to-run transition as heavy use of the quads during the bike effectively ‘switch off’ the hamstrings, making running difficult. Counter this by preparing your body with BRICK sessions – where you train on two or more disciplines one after the other – as recommended by the Olympic and World Champions Alistair and Jonathan Brownlee. The MaxiNutrition ambassadors’ Sprint Triathlon BRICK session goes like this: 60 minutes on the bike – 30 minutes easy, 20 minutes medium effort and 10 minutes hard. Then, transition straight into the run and do five minutes out, five minutes back, lifting the pace for the last five minutes.

Control cramp. This can be the bane of endurance racers, because once it sets in it’s hard to lose without stopping. Stop on the bike leg and you’ll lose time hand over fist. A common cause of foot cramp is badly fitting bike shoes. ‘Too small and the foot can’t lengthen, too big and the toes tend to curl constantly, seeking stability in the shoe,’ says Phil Burt. Play with insoles first, then consider getting a different size; ‘hotfoot’, numbness and tingling can also be a sign of too-small shoes.

Fuel up. The bike leg usually makes up 50% of total racing time; because you’re in the saddle it’s also a great time to take on fuel and water. Practise in training and have a race strategy. ’Aim to consume 30-60g of carbohydrate per hour and try to maintain hydration, but if you’re starting to struggle, having a backup plan can get you through those tough moments. Try adding an extra MaxiNutrition Fuel Max Gel to your race belt just in case,’ says nutritionist Gareth Nicholas.

Train your threshold. It’s important to do long, easy runs for base aerobic fitness but the biggest gains you’ll make will be in race-pace threshold training. ‘These sessions will be continuous efforts of 20-30 minutes or extended interval repetitions of between three and 12 minutes,’ says Dr Garry Palmer. These will train your body to process lactate from your muscles as fuel, helping you run faster with less effort.

Rest and recover. Running is a high-impact activity that puts a lot of stress on muscles and joints. This is OK if you allow time for them to recover and grow stronger between sessions, so no endless ‘junk training’ and re-fuelling. You have a window straight after training where it’s best to take on carbs and protein. ‘Post-training, focus on trying to return the body to preexercise levels ready to go again. To help your muscles rebuild, consume 20-30g of protein,’ says MaxiNutrition
nutritionist Gareth Nicholas.

Hit the gym. It might sound counterintuitive, but doing bodyweight workouts can make you a better, more robust runner. ‘Alistair and I go to the gym twice a week to do strength and conditioning workouts,’ says World Champion triathlete Jonathan Brownlee. ‘If I don’t workout for a couple of weeks I get injured. We do a circuit of exercises; it’s all bodyweight stuff like lunges. For me, it switches things on rather than getting them superstrong, so that when I run I keep using the muscles.’ Make sure you hit your whole body with moves like single-leg squats, pull-ups, press-ups and planks. HFM