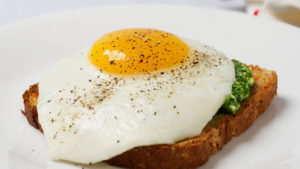 Eggs are as bad for you as cigarettes – that’s the controversial message behind Netflix documentary What The Health. The film claims that one serving of processed meat a day increases the risk of developing type 2 diabetes by as much as 51%, and that eating one egg a day is as bad as smoking five cigarettes.

However, don’t give up your scrambled eggs just yet – some professional members of the scientific and health industries have challenged the content of the pro-veganism documentary, which links consuming meat and dairy to poorer health.

Alexandra Freeman, executive director of the Winton Centre for Risk and Evidence Communication at Cambridge University, told The Times that the claims made by the documentary makers about eggs were sourced from a ‘very controversial paper’.

It’s not the first time eggs have suffered from bad press. During the 1980s, the message from health professionals and the media was that their high cholesterol levels were bad for our hearts. However, studies have since suggested the cholesterol in eggs isn’t associated with poor health.

Meanwhile, the claims made about processed red meat in the film are “distorted science”, according to one US dietician and nutritionist speaking to the Daily Mail. While eating processed meats has been found to increase the risk of type 2 diabetes, scientific consensus show the figure is closer to a 20%.

Cancer researcher Alice Howarth, told The Times, ‘While it is true that diet plays an important role in diseases including cancer and diabetes, the claims in this film vastly overstate and misrepresent the scientific understanding,’ ‘What the Health overwhelms the viewer with scaremongering “facts” which do not hold up to scientific investigation.’