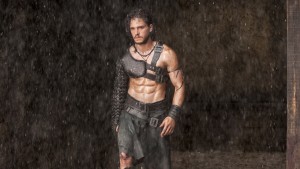 The Brit actor has cast off Jon Snow’s furs to reveal a stern set of abs for his role in historical volcano epic, Pompeii. We quizzed his trainer, Nuno De Salles, to learn how you can do it too

Find your fire. When I started working with Kit he was pretty out of shape. The director showed me a picture of Spartacus saying ‘I want him to look like that,’ and I though ‘Oh damn, we’re in trouble.’ For Kit, the motivation was that he was due to be half naked on the big screen. In order to succeed, you need to be certain what yours is.

Eat your way to abs. I took total control of Kit’s diet because, for the abs to come out its more about the diet than anything else. In the morning he’d haves some low-fructose fruit and an omelette, and then for lunch he would often have fish, veggies, and sweet potato. A safe bet for a snack would be a protein shake, with frozen fruits in it. Then for dinner; no complex carbs, lots of veggies and a lean meat like chicken or turkey.

Have your happy meal. Every Saturday Kit would go crazy with his cheat day. He looked forward to it so much he called it ‘Christmas day’. One week he had hamburgers, then it was pizza, next it was big steaks. The cheat day concept works really well with nearly all of my clients because knowing there’s a light at the end of the tunnel really helps them stay motivated.

Be a clever cheat. If you can only fit in working out three times a week, have your training day off on a different day to when you food cheat, so at least while you’re cheating you’re burning part of it when you’re exercising.

Lose the ‘diet’ foods. Bad diet is enemy number one of your future six-pack, and you should avoid anything high in sugar, fat, and complex carbs. But, if everyone was trying to eat sweet potatoes and chicken breast every day most of us would just go nuts! Find a healthy meal plan that works for you and won’t make you go crazy.

Keep supps simple. I boosted Kit’s omega levels with fish oils, and magnesium glycinate as he was sweating a lot and I didn’t want him to get any cramps. Then, to stop him snacking before bed, he’d have a whey and casein protein shake. That’s it.

Go beyond the crunch. We would hit the abs as much as possible in different ways, using high weights to really bring them out. One day we’d do leg raises on a bar, or we’d have a dynamic day where Kit would take a 20lb ball, raise it above his head and smash it on the floor, focusing on gaining a slow momentum.

Don’t run from cardio. Do it three times a week, whatever works for you. The important bit is the intensity: start at 20 minutes, then 30, then 40. Sprints are good if you need to get fitter for a sport but if fat burning is the goal, steady-state training is more effective.

Get real. What you can achieve depends on where you’re starting, but if you’re eating clean and working out three times a week, I’d say you can get a six-pack in anywhere between 3 months to a year. Kit’s result is extreme – but his training was relentless. He got addicted to it, In between days I would find him doing bicep curls in his trailer.

Remember nothing worth having comes easy. When we were done, Kit and I went out for dinner. He gave me a card that read ‘I’m really happy that I never need to see you again’. For me, that’s the ultimate thank you.

Pompeii is out now on Blu-ray & DVD

Got any epic tips for defining your abs? Tweet and tell us @HealthyForMen