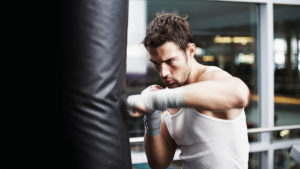 Pretty much everyone’s taken a grunting swipe at a punchbag: those big, heavy sausages hanging by chains from the ceilings of gyms. Whilst they’re great for developing punching power, when it comes to learning and honing boxing skills, improving fitness and developing reflexes sharp as a paranoid alley cat, focus pads, and their cousins focus mitts, are top of the toolbox. Used carefully, both puncher and pad-holder benefit immensely from even quite short, sharp sessions.

The most important punch of them all, the one that keeps your opponent at bay and enables you to prepare to throw a finishing punch, such as the right cross. Don’t think of the jab as a powerful, concussive punch, regard it more as a tester, a stinger, delivered sharply and cleanly. Snap the left glove to the pad in a straight line, slightly turning the left hip and shoulder as you do so. Push slightly with the ball of your right foot as you punch. Twist the hand so that when you connect with the pad the knuckles make the connection and the palm is facing downwards. And then – and this is so important – snap the hand back as quickly as you sent it out. 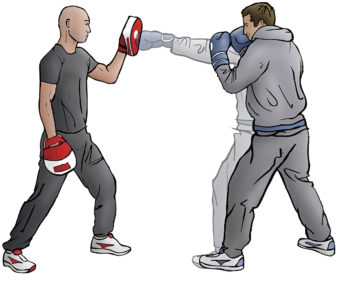 The jab is sometimes referred to as ‘the tin opener’, in that it can prepare you to throw the big gun, the right cross, with your naturally stronger side. Staying upright rather than leaning, twist the right hip and shoulder and the ball of the foot, and punch ‘through’ the right pad. Again, pull the arm back quickly. 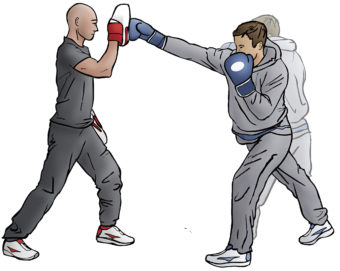 For a left hook, twist the body to the left, while keeping the arms tight (any space between the arms and body and your opponent’ll be in there!), bend the left arm at the elbow to 90 degrees. Then pivot back, hitting the pad with the palm downwards. Think stored energy as you first pivot the left, and then unstore it, big time. The right hook is less commonly used, but follows a similar pattern. 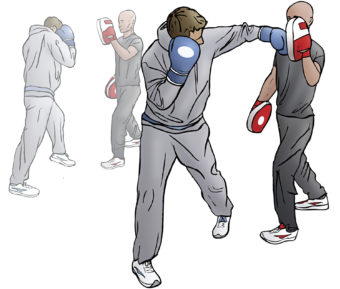 Beloved of many martial artists, this isn’t allowed in the Marquess of Queensberry rules (the generally accepted code of boxing), since it involves punching ‘blind’; i.e. you briefly turn your back and can’t quite see where you’re punching. Start by standing in a sideways stance, left side facing the pad holder, who holds the left pad up, perpendicular to the body. The puncher twists from the hips and waist, turning on the ball of the left foot, all the while straightening the right arm. The right first connects with the left pad. At this point, the puncher has a huge amount of stored energy. That all gets expended when he spins back round, extending the left arm, turning on the ball of the left foot, and hitting the right pad which the pad holder now holds perpendicular to the body. Take some time slowly practicing the choreography. Safety is crucial! 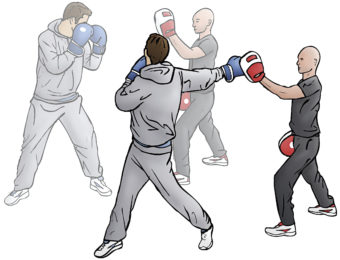 The puncher throws four uppercuts, alternating left and rights, whereupon the pad holder throws a left hook to the body. Ah, but the puncher has swiftly stepped back, keeping upright, leading with the rear leg, and has thus avoided being hit. Then it’s back in again for more.

Usually used when you’re up very close and personal with an opponent, this finisher punch requires you to drop the right shoulder (if it’s a right uppercut you’re intending), dip into a partial squat position, and then explode upwards, whilst keeping the nonpunching hand close to the head, keeping guard. 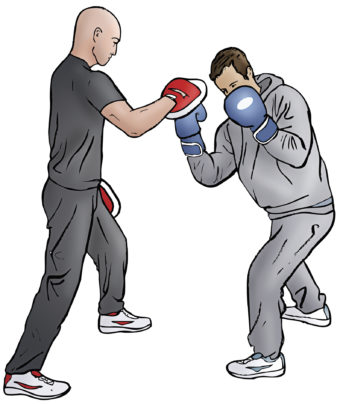 Putting it all together

Once you’re confident of the basics, you can work on any combinations you fancy. Try 2 minutes of any of the following: