This history of protein supplements
July 3, 2018 by Callum Mackenzie 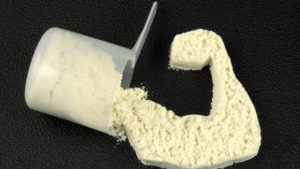 In 2016, the global supplement market was valued at just over £100 billion. Inside this financial behemoth, protein powders are by far the most used trick for athletic and physical enhancement. HFM explores the history of protein supps

However, while a sworn by staple of nutrition today, they’re a relatively new addition to the gym bags of the world’s buffest men. We look back at the history of protein powders, discovering exactly when this ‘essential’ product went mainstream.

For more on the history of protein supplements, check out the Healthy For Men Podumentary series in which we speak to nutritional consultant Drew Price about the nature and evolution of protein supps, amino acids and creatine. Download on your favourite podcasting app of listen below:

The concept of goal-orientated eating dates back to the earliest accounts of athletics. In Ancient Greece, Spartan warriors were given extra-large dinners to boost their strength and size, while legendary wrester Milo of Croton reportedly supplemented his training with 9kg of meat, 9 kg of bread, and 18 pints of wine a day.

Proteins were discovered in 1838 by Jöns Jakob Berzelius. Named from the Greek word ‘protas’ meaning ‘of primary importance’, they are now the most studied macronutrient on the planet.

Despite the timeless appeal of a chiselled, muscular physique, for a majority of its life bodybuilding was a fringe, sub-culture of a sport. Eugene Sandow, touted now as ‘the Father of modern bodybuilding’, was one of the first lifters to shed any real light on it.

A German who moved to London to avoid military service, in 1911 he marketed ‘Sandow’s Health and Strength Cocoa’; a rudimentary milk drink which appears to be the first protein supplement on the market.

Despite initial success, mid-way through WWI Sandow’s early manifestation of a supplement market folded, in part due to underselling, in part due to anti-German sentiment across England.

In the 1930s, a pharmacist called Eugene Schiff developed a method of processing whey from milk for human consumption. Schiff created ‘Schiff Bio-Foods’, a company selling what was effectively protein isolate. Confined to drug stores, the product did not receive much commercial success.

Along with a variety of other things, WWII brought with it a demand for non-perishable foods and supplements. Powdered milk, eggs, and later soy protein were marketed as easy ways to complete nutritional needs in a time when food was scarce. This interest in nutrient rich food extracts encouraged the supplement market to boom post-war.

Bodybuilder and scientist Irvin Johnson (who changed his name to ‘Rheo Blair’ after a spiritualist told him he’d have more luck if his name contained more ‘R’s), developed the first dissolvable protein in the early 1950s. “Johnson’s Hi Protein Food” was a milk and egg-based concoction.

Seeing Johnson’s success, in 1952 Bob Hoffman of York fitness cashed in on the venture too.

Joe Weider, of the ‘Weider’ fitness chain, soon followed suit, and the free-market race to be protein’s top dog was born. While both new brands lacked quality their superior marketing routes allowed them to dominate sales.

1960s, Quality gets an upgrade, and up comes casein:

In the following decade, research picked up and quality improved. Rheo H. Blair released Blair Protein Powder; then the finest option on the market, it contained both egg isolate and slow-release casein proteins, producing comparatively powerful results in those who tried it.

By the 80s, protein powder had become a true celebrity. No longer niche, it moved from Art Atwood to Arnold Schwarzenegger levels of fame.

Fuelled by an increase in recreational bodybuilding, the market exploded. Big brands like Met RX were born; producing products based on specific powder species. Some used the amino acid profile of baby’s milk, believing this to be the purest form of nutrition for a human body.

After decades of research and testing, creatine blasted into the mainstream. By the time of the 1996 Atlanta Summer Olympics, it was estimated that over 80% of athletes were using creatine.

Today’s protein market is truly saturated; with everything from beef-based to amino-acid specific shakes available in just add water form. While the benefit of some is still ambiguous, many do exactly what it says on the tin amazingly well. Do your research, work hard, and you’ll see results in no time.

For more protein-fuelled content, pick up Healthy For Men magazine in any Holland & Barrett store throughout the UK