Top herbs and spices to boost your immunity
April 29, 2020 by Tom Rowley 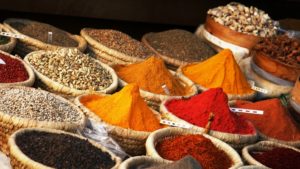 Cooking with herbs and spices can add some serious macros to your meal plan, and help fight off all kinds of diseases. Did you know cinnamon is full of potassium, calcium, manganese, iron, zinc, and magnesium? Below, we’ve listed our top six herbs and spices that are essential to any man’s nutrition plan.

A 2012 study from Ball State University, USA, found that this spice lowers post-meal blood glucose concentration, cutting down on fat storage and keeping food available for immediate energy. At breakfast, sprinkle it on porridge, or a bowl of yoghurt, nuts and fruit, or add a stick of the fresh stuff to coffee. The Vital Ingredient Ground Cinnamon, £2.59 for 75g, hollandandbarrett.com

Piperine, the active ingredient in black pepper that gives it its taste, increases the bioavailability of other nutrients in the food you season it with, thereby making the rest of your meal more worthwhile. It also upped fat-burning in a 2010 animal study. The Vital Ingredient Black Peppercorns, £3.99 for 100g, hollandandbarrett.com

In a 2014 trial, participants dropped three times as much body fat (alongside lowering unhealthy LDL cholesterol levels) by eating a teaspoon of this spice a day mixed into yoghurt. Throw a dash into chillies and curries, or sprinkle a little on a carrot salad. The Vital Ingredient Ground Cumin, £2.69 for 150g, hollandandbarrett.com

Capsaicin, the compound that gives cayenne peppers their heat, triggers fight or flight hormones, mobilising fat for your body to use during workouts…or anything else. The Vital Ingredient Cayenne Pepper, £3.49 for 150g, hollandandbarrett.com

Most commercial salt comes stripped of its mineral content, chemically bleached and packed with additives to prevent ‘caking’. Not the pink stuff, which can improve electrolyte balance, lower blood pressure and balance your body’s pH levels. Cook with it, sprinkle a (moderate) amount on food, or take a pinch with a glass of water in the morning. Profusion Himalayan Rose Pink Crystal Salt, £2.99 for 140g, hollandandbarrett.com