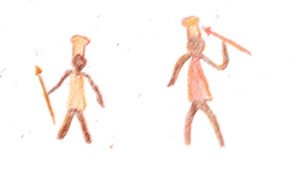 We’re taking a look at the world famous diet which has been taking men back to their roots since gastroenterologist Walter Voegtlin wrote about the caveman diet in 1975. Below are three common myths associated with the diet – so before jumping on board, or completely writing it off, let us help you summarise the truth about a Palaeolithic food plan.

If a caveman couldn’t eat it, neither can you. So fresh fruit, veg, meat, fish, eggs, nuts and seeds.

Any paleo food is healthy

Paleo diets involve ‘pre-industrial’ foods, ruling out grains, legumes and dairy, but does this mean that all ‘paleo’ foods are healthy? Sports nutritionist Dr Brad Dieter thinks not. ‘Paleo is often mistaken for an infallible way to approach food, but if you eat only paleo cookies, for example, you won’t see results.’

Seen as meat-guzzling and grain-dodging, is Paleo simply a low-carb diet? ‘It can be, but it can also be high carb if you eat sweet potatoes and other root vegetables,’ says Dr Dieter. ‘If you need fewer carbs, include more green leafy veg.’

‘Some academics say you need grains for fibre and dairy for calcium. But you can get enough fibre and calcium from grain-free sources, like kale, spinach, squash, almonds,’ says Dr Dieter.