Why silence is good for your health
March 20, 2020 by Tom Rowley 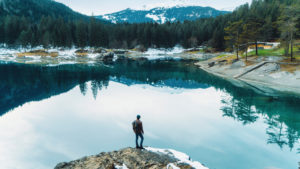 With many of us spending time in the quiet of our own home, HFM explains how silence can be great for your mental health

DJ Nat Rich was addicted. With low moods and a yearning to suppress her emotions, the 35-year-old from London slipped into a pattern of self-medication with drugs, alcohol and a life of heavy tunes. ‘I actually became addicted to music, which I never thought possible,’ says Rich. ‘At the time I was DJing and I’d been studying advanced radio production. My life was about music. When I was feeling down, I’d put on a track to make me more happy or energetic. But I was avoiding how I really felt, just like I was with drugs and alcohol.’

Rich decided to confront her addictions, giving up drugs and alcohol for good, but also pledging to a melody-free life for a total of four months. ‘Giving up music wasn’t an easy process,’ she admits. ‘But after those four months of pretty much silence, sitting with myself and my own thoughts, I went back to music with a fresh approach. I could listen to tracks that had a bit more emotion – that were more classical, ambient and chilled out. I listened to music I never would have listened to before because I had entered a new emotional state.’

This change is what many are trying to achieve when they embark on silent retreats or overseas adventures to lands free of industrial noise. These pilgrimages into silence are, according to travel publication Lonely Planet, on the rise. The Finnish tourist board has been marketing its quiet goldmine to potential visitors, with the slogan ‘Silence, please’, capitalising on the country’s vast voiceless landscapes and the infamous only-speak-when-necessary Finnish attitude. And there’s good reason why a world plagued with noise would desire it.

The perils of noise

Science backs up Rich’s pursuit of time spent seeking zero music, and as little noise as possible. A study from Lancaster University found that music impairs creativity. Researchers suggested that this could be because music disrupts our verbal working memory, which is the brain’s ability to remember how to perform a specific activity.

On top of causing a creativity drought, the white noise of our environment is stressing us out. ‘It’s fair to say that most people could do with less noise,’ says Dr Tim Lomas, senior lecturer and one of Europe’s leading experts in positive psychology. ‘People often don’t have enough time and space to be quiet, especially with the frenetic pace of the modern world and all the stimuli that are impinging on us constantly.’ Industrial noise and the mass of natter emanating from large city crowds is a not-so-silent killer.

It can often go unquestioned and be taken as an inevitable by-product of our environment – but experts have researched the toll it has on our health. A 2004 paper found that higher noise levels in neonatal intensive care units increased blood pressure, heart rates and disrupted sleep. The World Health Organization (WHO) conducted a study which concluded that at least 1 million healthy life years are lost every year as a result of traffic-related noise in Western Europe. The study suggests that there’s a correlation between environmental noise and cardiovascular disease, cognitive impairment, sleep disturbance, tinnitus and stress. Dr Lomas emphasises the importance of having time away from the noise and finding your quiet place. ‘These noises can often catch our attention in a way that promotes our worries and anxieties,’ says Dr Lomas. ‘There’s real value in having time to reflect and feel calm.’

The absence of noise can have a powerful effect on the brain. A study from Duke University in the US suggested that two hours of silence a day encourages cell development in the hippocampus, the region of our brain that is associated with forming memories. Psychologists who contributed to a study in Frontiers In Human Neuroscience found that silence can put the brain into a ‘default’ mode that helps us deal with unprocessed thoughts.

‘When the brain rests, it’s able to integrate internal and external information into a “conscious workspace”,’ says Joseph M. Moran, lead researcher of the study. And finding a way to incorporate more quiet in your life doesn’t have to be a slog. ‘A walk in the park can be enough for most people. I’ve tried a few silent retreats, which can be really good – but they’re not for everyone,’ suggests Dr Lomas.

‘Meditation groups can offer space to get away and structured support for people to have some quiet time. It might be tricky for you – you might be confronted by thoughts you didn’t know you had, or you might find it boring or unsettling. So it’s important not to do something drastic, like going to live in the desert for a month on your own – just an hour here and there in a place that feels safe is enough.’ While Dr Lomas would recommend some silent time away from modern noise pollution, he stresses that silence and isolation can exacerbate mental health problems.

‘There is research to suggest that meditation retreats can be damaging to some people, so they’re not to be taken lightly. A long bout of silence can be quite a powerful experience, and that’s not always easy to handle. You have to see what works for you and then build up to it.’

And, of course, noise in itself is not inherently bad. A 2017 study in the journal PLOS One found that listening to upbeat classical music helped people perform tasks involving divergent thinking (exploring solutions and generating creative ideas), suggesting the right genre of music at a responsible frequency has its benefits.

Now Rich has developed her experience with noise and silence into a service called I Am Sound (soundisahealer. com), offering holistic and practical mentoring with sound workshops, drumming therapy, mantra groups and meditation. She understands that using those familiar fast tempos to escape her problems ignores the healing nature of music. ‘My music taste has improved – I can go deeper now and listen to music that might make me cry or feel more relaxed. I never really knew that’s what music could do until I introduced silence into my life. It was out of the silence that everything made sense to me.’