Are you in a toxic relationship?
August 9, 2019 by Tom Rowley 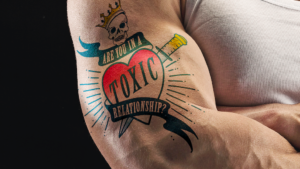 It’s worryingly common and it could eventually kill you, so how do you cope when love turns toxic?

It was over 60 years ago that the RJ Reynolds tobacco company concocted the slogan, ‘More doctors smoke Camels than any other cigarette,’ in an effort to show how healthy they were – thereby holding onto a myth that had already triggered an upsurge in lung cancer cases from the 1920s onwards. Cigarettes are a well-established risk factor for early death, so it might seem a bit of a stretch to compare smoking to toxic relationships. But it’s not.

Consider that the Department of Epidemiology and Public Health at University College London found relationships to have a dramatic impact on coronary heart disease. Another study from Brigham Young University in Utah found those with inadequate social relationships have a 50 per cent greater risk of earlier mortality than those in adequate ones, while a study from Ohio State University College of Medicine found hostile marital interactions could slow or prevent the healing of wounds.

How do you know if you’re in a toxic relationship?

Of course, if you recognise toxic behaviour in your partner, it doesn’t mean you’re going to die early, or even necessarily that you’re in a toxic relationship. It’s when this behaviour becomes part of a pattern and that pattern is compromising how you feel that something drastic needs to be done. ‘There are two types of relationship,’ explains human behaviour expert Patrick Wanis. ‘Parasitic and symbiotic. Parasitic is where one person feeds off the other; symbiotic is where both people mutually benefit each other.’

Wanis describes a parasitic relationship as where one party benefits at the other’s expense. This could be a victim scenario, where the parasitic member is constantly needing the other to save them, and even making the other feel as though they’re causing the parasitic one to be a victim. ‘If your partner is constantly playing the victim, then you have to constantly become the rescuer,’ says Wanis. ‘They could then become the persecutor and say, “It’s all your fault that I’m in such a bad place.”’

Toxic behaviour can occur if your partner is someone who responds emotionally to criticism. Researchers from the University of Auckland and the University of New Hampshire found that those who experienced hurt feelings when being criticised by their partner were more likely to try to make their partner feel guilty – and so the pattern of victimhood begins. ‘Guilt-throwing is where your partner tries to control you via guilt,’ says Wanis. ‘There can be stonewalling [where one member controls the other by refusing to communicate or cooperate], criticism, judgement, manipulation and domination. There are more examples of an unhealthy relationship than a healthy one.’

At their extreme, toxic relationships can include verbal, physical, and sexual abuse, but there’s a severe form of psychological abuse that’s been getting media attention in recent years, which Wanis stresses is more common than you might think: ‘Gaslighting is a form of psychological abuse where one person tries to convince the other person that he or she can’t trust their own memory or perception and that they’re therefore insane. A lot of people experience it. Women experience it the most, and it’s done by a lot of women to women. Gaslighting is a really powerful form of abuse.’

Finding yourself in a toxic relationship might feel like being trapped in a labyrinth where your own inability to confront your partner makes up the dead ends. But Wanis offers the reassurance that taking control is the only way to deal with toxicity: ‘Become the master of your kingdom,’ he says. ‘Take charge of everything in your life. If you accept full responsibility of what’s happening, you can shift from victim to creator. You can then ask yourself, “What’s happening here? Why am I allowing this person to use me? Oh, it’s because I don’t think I’m, worth anything.” Or, “It’s the only way I can feel important,” or, “I’m just copying what I was taught,” or, “I’m a people-pleaser.”’

Taking responsibility doesn’t mean transferring the blame: it’s about evaluating the things that you have the power to change. ‘When you make it introspective, it’s not about attacking yourself or making you feel worse, but about saying, “I created this, so I’m going to create something different.”’

Identifying an unhealthy relationship isn’t necessarily easy, but we can at least clarify what we’re aspiring to. ‘The components to a long-lasting relationship are passion, intimacy and commitment,’ says Wanis. ‘Passion is that mutual, chemical attraction; intimacy is vulnerability; and commitment is where two people say they’re going to build a life together.’

Achieve this, and you could be increasing your longevity and decreasing chances of morbidity. A study from the University of California found that mutually supportive relationships resulted in a reduced chance of illness and better emotional and physical wellbeing for both. ‘There’s a difference between erotic love, which is obsessive desire, and real love,’ says Wanis. ‘There are many different definitions of love, but, ultimately, love should just be wanting the best for the other person. A healthy relationship has to be where two people have set up a common dream, but they can still have their own identity within the context of the unified identity of the relationship. Loving someone is when you know them, and you still want to be with them.’ If you’re struggling to identify these traits in your relationship, the stress and anxiety of toxicity could be killing you. It’s time to stub it out.