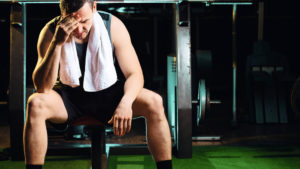 Whether stress induced or a lack of proper nutrition, more people than ever are feeling the burn. A study by Virgin Active has shown that 80% of Londoners admit to feeling constantly stressed, and seek refuge in exercise. HFM got in contact with Dr Gerald Coakley, who gave us the lowdown on when you should visit a fatigue clinic.

‘Fatigue is an extremely common symptom and rarely has any serious cause. Most men I see are not getting enough good quality sleep, or are chronically stressed usually at work, sometimes at home too. Sometimes they have difficulty recognising the important underlying issues.

‘Most can self-manage with a healthy balance of work, diet, exercise and relaxation. Many are, despite feeling exhausted, getting a very poor quantity and/or quality of sleep, and can be helped by simple advice on tackling insomnia – see here.

‘There’s a small minority who have fatigue so intrusive it stops them from engaging in sport and a normal social life, or even so severe that they have to take time off work.’

‘When fatigue is this severe, it may indicate chronic fatigue syndrome (CFS/ME), particularly if there is a flu-like illness at the start.  Medical conditions like an under active thyroid or inflammatory muscle disease should also be considered. These people usually need a rapid definitive diagnosis to exclude serious medical illness, and a skilled team of healthcare practitioners to get them back on track. That’s where The Fatigue Clinic can be of help.

‘Some men with CFS/ME wonder why a trivial viral or bacterial illness should result in such severe and long-term fatigue, particularly as they have probably had similar illnesses many times before (adults get on average 3 viral upper respiratory infections per year).

‘Usually the key factor is when the man has become unusually stressed due to overwork or lack of a supportive environment. It could also be caused by a work/home life imbalance. Chronic stress has an adverse effect on the hormone axis, making men vulnerable to relatively trivial infections which at other times in their life would have had only a small effect.

‘So for men with CFS/ME, we end up offering lifestyle advice including how to properly exercise. We also discuss therapies to help them recognise stress, deal with it more effectively, and improve their resilience.’

For more info on fatigue and ME, visit www.fatigueclinic.co.uk