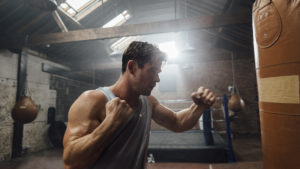 Chris Hemsworth is known for his impressive physique and acting chops, but here he explains that success is all about balance

Chris Hemsworth is one of those whose natural level always seems to be effortlessly high. Perfectly shaped, effortlessly toned, with stamina, drive and energy in abundance, the middle brother of the family’s trio of muscular movie men appears to have it licked.

Yet to suggest the 35-year-old Aussie has it easy is, of course, to do him a huge disservice. ‘For me, health has always been about being multidimensional,’ he begins. ‘That sounds complex but it’s actually very simple. I break it down into three straightforward steps, and each have the same investment and potential as the other.

‘So there’s the working out, there’s the food and there’s the sleep. When you approach health like that, and are concentrated in making sure you respect each of those three things as much as the other two, you can quickly find balance, and from balance you gain structure and a base on which you can succeed.’

That ‘base’ has elevated Hemsworth into becoming the ‘go-to’ man in Hollywood’s strength club. For any action role, his is the first name on directors’ wishlists, and his ability to deliver power and poise has seen him excel in the likes of <Thor>, <The Avengers>, <12 Strong> and more. Hemsworth has recently designed his own fitness and nutrition app called <Centr>, that encapsulates working out, food, and mindfulness into one downloadable programme.

‘The truth is I do invest a lot of hours in the gym, and it’s backed up with eating a particular sort of diet and subscribing to a particular healthy lifestyle. There is no secret recipe for it. You just have to put in the hours; you have to dedicate yourself to the task.’

If his work schedule allows, Hemsworth will train twice a day, for up to two hours at a time – that alone, is a dream out of reach for many of us. He’ll work out five days a week and rest the other two. ‘It’s important to have the right amount of rest and I have kids now, so that becomes a little trickier to navigate.

‘Yet for all that I do in the gym, I would still say diet is the most important factor, especially if you’re talking about just general health and weight loss and staying lean. If I’m not training that much but my diet is spot on, then I will stay in the good zone. I also find that if you want to put on the muscle mass, you definitely have to eat more calories and have a higher calorie intake,’ he continues. ‘It’s funny though, because I have tried to play around with the diet and have less animal protein, with a bit of vegan cooking put into the mix. It goes against what you would imagine is logical, but it has worked for me.’

Giving his body a break from excessive protein intake has been a revolutionary step for Hemsworth. ‘I think the extremities of some of the diets I’ve had means it feels like a relief either to break from one or find better balance between a few. Fruit and vegetables don’t usually sound like the most manly of things to be going on about, but in terms of what they do for the body I will have them over almost any other food.’

Being so in tune with his own body means Hemsworth can demand things of it that go far beyond the norm. Different projects can mean rapid weight loss or gain, but the father of three says he can quickly get into the mode for body change.

‘Given the choice, I’d definitely rather put the weight on than have to lose it,’ he says, ‘although both are taxing in very different ways. They both have their plusses and minuses. The thing about weight loss is the burden, the pressure, and the feeling of weakness. I did Michael Mann’s <Blackhat> and I’d started to lose the weight at the beginning of that. By the time I got to filming <In the Heart of the Sea> eight or nine months after, I was exhausted, and by the end, dead. It can be very difficult to get your body back to where it wants to be after changing so much of your structure, but it’s never impossible.

‘There are no shortcuts though – they just don’t exist. You train; you gain. It comes back that little bit easier each time, the muscle memory, but going from one to the other, whatever that is – eating nothing or eating everything – I’d say neither is particularly comfortable.’

Chris Hemsworth regularly works out with wife Elsa Pataky, admitting his training buddy is relentless in the gym. ‘She’s just got amazing cardio and stamina; it’s incredible. She would bash me in a fight, which she has done… there is no good time to talk about it!’ he laughs. ‘My trainer, Zoco Body Pro (Luke Zocchi), was a boxing specialist for a few years and he knows how to push the right buttons.’

While Chris Hemsworth endorses the idea of having someone alongside you when training, he admits exercise is still quite a personal thing, and the goal is always the drive towards the finish line. ‘That is ultimately what I enjoy – that release of endorphins,’ he says. ‘Of course, there are times when it’s the end of the day or first thing in the morning and training is the last thing I feel like doing; but all I have to do is remind myself how I feel afterwards, and that pushes me on.’ 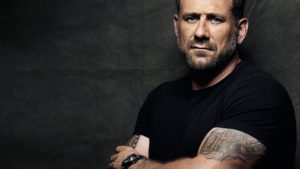