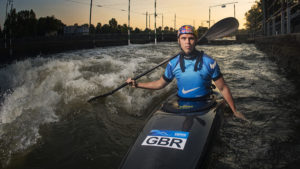 Joe Clarke knows what it takes to win an Olympic gold medal in canoeing, so HFM spoke to the champion of Rio 2016 about what we can do to try and master the unpredictable rapids

Canoeing has become one of the most popular boating activities in the UK. What do you love about the sport?

No day’s ever the same. We’re in France at the moment and the course run here is part natural and part man-made, so they’re trying to dictate what kind of flow’s going down at any time. The canoeing course changes and the features change marginally each day.

It’s not like you’re running a 400-metre track and that’s that. It’s completely different every time. Imagine the running track has potholes in each lane. But that’s what makes it exciting every day – you go out and everything feels completely different. You’re always trying to chase any similarities you can find and pull knowledge from different courses, and experiences come into their own at different times. 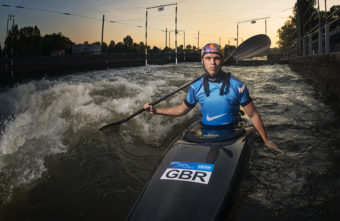 Joe Clarke poses for portrait during project Against the Tide in Prague, Czech Republic on 18th July 2017

Does the unpredictability make it difficult to train for?

It does make training quite difficult, because it makes it hard to measure quite a lot of things. There’s been times where I’ve been the fittest and strongest of my career and not had the results I was hoping for, and equally vice versa where I’ve not been on top form and still had good results. It’s one of those where it’s so hard to say what makes a good performance, but you just do everything in your power to try and put everything together in the right place at the right time.

Has the course ever really held you back?

Not yet – fortunately, I’m quite adaptable. I might forget a bit of equipment and have to borrow a friend’s paddle or something, but I just try and work the fact into my routine that, sometimes, these things do happen. If you lose your equipment you’ve got to think on the spot, because you can’t let all that training go to waste.

So, what’s the best way to get canoe ready?

Just put yourself in different scenarios and always think ‘what if?’. How are you gonna react to most situations? How best to deal with it so it doesn’t blow up to be something bigger than it is.

What kind of training do you do leading up to a race?3

I do lots a of weightlifting in the gym and power-based sessions, and I do cross training, but don’t run much over an hour. But boat fitness is shorter stuff, so 10-15 second efforts 1-1 rests, really high-intensity stuff, speed endurance, quite short sets, like a HIIT workout in the kayak.

What’s been biggest obstacle in your career?

Fortunately, I’ve had no major injuries. The biggest one put me out for two week, but that’s nothing in the scheme of things, as it’s a sport riddled with dislocations, but touch wood I’ve not yet. I’ve done a lot of work to make sure my shoulders are strong and flexible to keep them healthy.

Do you have a nutrition plan?

I work closely with a nutritionist. The main thing is keeping the protein intake high, so trying to work on 2.5g to 3g of protein to 1kg of body weight each day. And trying to build a healthy balance of carbs and vitamins by aiming for 10 plus fruit and veg portions each day.

What do you eat before a race?

It’s important to have easily digestible stuff; protein’s really hard to digest, so coming into a competition I’ll have carbs like porridge, bananas and little  . I’ll also build some caffeine into my routine for an energy boost, so I’ll have half a can of Red Bull about 30 minutes before the run. I’ll also have some water just before, because most of the countries I go to are 30 degrees plus on race day; it’s important to have that pick-me-up with a mixture of sweets and sugars to get you in the zone. 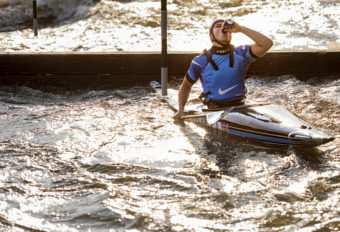 Joe Clarke relaxes during project Against the Tide in Prague, Czech Republic on 18th July 2017

What advice would you give to someone who wanted to take up canoeing?

There are more opportunities to get into it than ever. The biggest thing is not to shy away from it because of body size or weight. The guy who won the gold medal in Beijing was 92 kilos; the guy in London was 64 kilos, and I was 76 kilos [in Rio]. There’s a massive weight range and with that comes height range. You might think you have to be a certain size or weight to do it, but there’s no written recipe for success in canoeing.

It’s important to manage your expectations. Just because you put in all the training, things aren’t always gonna work out. People end up overtraining because it’s one of those sports where the gains become so small when you get my level that you think the more you train the better you’ll become. Don’t rush it, and make sure you put the hard work in the right places. 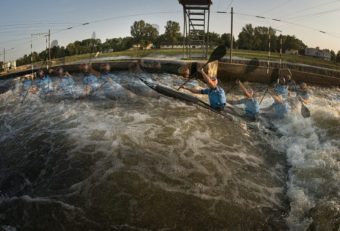 Joe Clarke performs during project Against the Tide in Prague, Czech Republic on 18th July 2017