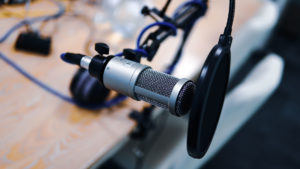 Whether you’re slogging through your morning commute, pounding out miles on the treadmill, or drowning out your nattering co-workers, Healthy for Men has your back. From health, to fitness, to the universe that made them, here are our top ten podcasts to educate, entertain and empathise

Lewis Carroll once said: “You can never get a cup of tea large enough, or a book long enough, to suit me.” Were that surrealist genius still alive today, we are sure that quote would have “or a copy of HFM thick enough” slipped somewhere in the middle.

Well, dear Lewis, you will be glad to hear that now, hand in hand with your favourite magazine and website, comes a completion to the holy trinity, with the Healthy For Men podcast.

Episode 1 explores anxiety and dissects modern mental health; moving from the world of pro-wrestling, to the tribal people of Borneo, to that heart-stopping moment on Waterloo Bridge. Subscribe now, so a few months down the line you can say “I listened before it was cool”.

‘Depression is a vicious cycle of solitude and stigma’ says comedian John Moe, ‘that leaves people miserable and sometimes dead. Frankly, we’re not going to put up with that anymore.’

In a show that craps on social stereotypes and works to laugh the shame off of mental health, Moe presents a series of frank, funny, and bull-sh*t free discussions about depression. Playing host to a number of very amusing sufferers of the disease, ‘The Hilarious World of Depression’ is a must listen for anyone seeking knowledge, information, or even empathy.

When it comes to recommending a source of intellectualism, saying ‘TED talks’ is a lot like recommending ‘vanilla’ as a flavour of ice cream, or ‘breathing’ as a way to keep fit. It’s not a revolutionary idea. But, that being said, regardless of whether you’ve already heard of them, ‘TED Talks Health’ deserves a shout out.

It’s motto, ‘ideas worth spreading’, could not be more on top of the money. Since 1984, TED talks have given the low down on the universe’s biggest talking points, and TED talks health is a whittled down selection of their finest health-themed moments.

From ‘how to start a conversation about suicide’ to ‘the taboo secret to better health’ these colloquialised knowledge nuggets are like a selection of intellectual canapes; tantalising, tempting, and all too easy to “have just one more…”.

Be it our lofty 21st century morals, a shot at a healthier existence, or just a desire to break up this slow, repetitious march through life, in recent years something’s pushed many of us to cut meat cold turkey and switch to a veggie diet. In fact, the number of UK based vegans has almost septupled since 2016; skyrocketing from around 540,000 to over 3.5 million.

Whether you’re a new herbivore, are curious about its potential benefits, or just a nutrition nut in general, No Meat Athlete Radio could be a place for you. Providing meat-free tips ‘n’ tricks to boost energy, enhance athletic performance, and live the freshest life you can; presented (best of all) in a clear, and adamantly not-preachy manner.

Rainbows, hummus, and Robin Williams. There are few universally tolerated things in this world, but the Joe Rogan Experience seems to be one of them.

In this long-form chat, comedian, fighter, and general existence-enthusiast Joe Rogan, takes the hand of his chosen guest, and eloquently meanders through every possible topic of conversation.

Playing host to athletes and astrophysics, nutritionists and ex-cons; whether you’re looking for diet tips, workout plans, or a better understanding of crypto-currencies, ‘JRE’ will sort you out, and it’ll make you laugh while doing it.

With a PhD in biomedical science, 7 (as of writing) publications in well-respected medical journals, and some of the most revolutionary ideas in the field of nutrition and healthy living, Dr Rhonda Patrick does not require a flowery introduction.

Discussing health issues and fitness tactics you would never have thought to try, Patrick’s ‘Found My Fitness’ is an essential stop for anyone looking to broaden their nutritional knowledge and learn some facts from outside the mainstream.

Brendan Schaub, an ex-UFC fighter turned stand-up comic (a career progression that makes as much sense as a butcher turned vet), joins D-list celeb Bryan Callen to, in their own words, ‘act like a couple of silly geese’.

The Fighter and the Kid is a podcast that really shouldn’t be good, yet somehow manages to be. Best surmised as two grown men refusing to act grown up, it was the success of this covertly informative giggle-fest that allowed Schaub to leave a career being rhythmically punched in the head behind him.

The Fighter and the Kid is undoubtedly not for everyone; but if you want to receive genuinely helpful fitness, fighting and nutrition tips while listening to a 51-year-old man fart into a microphone, you should definitely give it a try.

A fitness podcast like no other; free of words.

There is little more to say about Podrunner than what it actually is: a source of free music for athletes of all kinds. With playlists to match any workout, whatever route your taking to reach your fitness goals, Podrunner will have a beat to get you there.

With accompaniments for interval training, distance running, light jogging, and heart pounding 5ks, you’d be silly to not sample a podcast that’s been on iTunes’ top 100 download list since 2006.

From critically injured ex-athlete sleeping on his sister’s sofa, to multi-million-dollar business owner with three published books, Former NFL player Lewis Howes knows what it’s like to experience lows in life, and certainly knows how to bounce back.

In one of the world’s top rated motivational podcasts, Howes interviews the greatest influencers, entrepreneurs and monetary success stories of our time; bringing the tips, tricks and lifestyle habits behind the world’s most enviable existences right into your ears.

Whether you want to change your life or learn how others managed to, ‘The School of Greatness’ is worth a listen.

A show whose title, much like ‘Midsummer Murders’, sums itself up.

Imagine your dad, taking your hand, popping the hood of the universe, and for around an hour, gently explaining how it works.

With its roots in 2008, just three years after podcasts were added to the iTunes library, ‘Stuff You Should Know’ is a bit of a legend in the industry. Covering everything, form Depression, Pain Tolerance, Itching, the Hell’s Angels, Con-artists, Karma, Curiosity, Shrunken Heads, Fossils, Artificial Sweeteners, Military Snipers, Hip-Hop, Torture, to Innuendo, and the Five-Second Rule; with over 1000 episodes on 1000 drastically different topics, say you’re unable to find one you’re interested in, and you’re lying (and thanks to episode 949, I can prove it).