Is natural always better for you?
September 20, 2019 by Tom Rowley 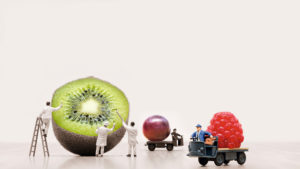 What does natural mean, anyway? In the UK, the term, when applied to food labelling, has little technical meaning. Legal guidelines suggest it cannot be applied to products with man-made ingredients, which means some foods have a complex relationship with the word. Take sugar, for example. You might consider it natural, but it can only ever be labelled ‘naturally occurring’ (ie it exists naturally in the food and isn’t added to it) and never natural.

It’s processed food that we think of as unnatural, and unlikely to be on anyone’s healthy eating shopping list. But is it really that bad? ‘The more invasive the processing is to the organic structure of the food, the more nutrients tend to be lost,’ says Janet Thomson, a mind/body expert with an MSc in nutrition. ‘At worst, the food structure is altered to something the body does not recognise and cannot handle effectively. Bread made with finely milled flour is digested and absorbed quickly, causing an insulin spike, for instance, but higher up the scale are foods that are chemically altered.’ A good example of this is industrial hydrogenated trans fats, which are created by adding water to liquid oils in an industrial process to make them more solid and spreadable.

Processed foods may contain additives that are associated by some consumers with symptoms including headaches and stomach problems. These additives include taste-enhancer monosodium glutamate (MSG) – although this can basically be found in mushrooms, tomatoes and celery, which is why these are used to enhance flavour – and aspartame (an intense artificial sweetener), or preservatives like propyl gallate. ‘Some foods that sit on shelves as opposed to in the fridge can be worse as they contain chemicals and preservatives that enhance shelf life and add flavour that would be lost over time,’ says Thomson.

To avoid these additives, canned and frozen foods are a surprisingly good option. Even the freshest veg loses its nutrients when exposed to oxygen, heat and sunlight, but produce flash-frozen at source can keep them almost until you’re plating up.

Part of the process

‘There are many processed foods that can be part of a healthy diet, such as tinned fish, rolled oats or plain yoghurt,’ says Mike Gibbs, founder of NHS-backed lifestyle app OurPath. ‘Choose basic wholefoods where possible, such as vegetables and fruit – and avoid ultra-processed foods with more than five ingredients. Oh, and keep in mind there are at least 60 legally recognised ways to label sugar.’ Glucose, lactose, ribose – just a few synonyms for the sweet stuff.

Believe it or not, some foods are better for you after processing. ‘Even the most natural foods can contain toxic compounds that are a by-product of their own respiration and growth – they are not harmful to the plant itself, but may be harmful to humans,’ explains Thomson. ‘An example would be foods that contain lectins, such as beans and lentils, which can cause chronic diarrhoea and vomiting.

Lectins are easily destroyed by soaking and then boiling – and tinned beans have already been through this process so can be used without further preparation.’

Meanwhile, some unprocessed foods could be worse for you than processed ones. Freshly squeezed orange juice, for instance, is full of fruit sugars, so – from a weight-management perspective – it’s arguably worse than diet cola.

The case for frankenfoods

Genetically modified (GM) foods have had their DNA modified by humans, so it would be fair to call them unnatural. They have to be labelled as GM by law in the EU, but does that mean they are unhealthy?

This is where things get contentious. Some experts cite concerns over their ‘unnatural’ provenance – but others argue humans have tinkered with nature for years, by selectively breeding hardier, tastier crops. In comparison, modern GM foods seem only mildly messed-with, and could even be beneficial. Golden rice, for instance, is a variant that carries vitamin A in its grains, instead of its inedible leaves – engineered by inserting three new genes into the plant’s DNA. It’s approved for cultivation in several countries. The long-term effects are yet to be seen – as with other GM foods – but there’s concern in some quarters we’re binning healthy food due to squeamishness about Frankenfoods.

So is natural food better than unnatural? Sure: if you take it with a metaphorical pinch of salt. The best route, as always, is balance. If a tin or two helps, tuck in.