Jonny Benjamin takes on the London Marathon
May 15, 2019 by Tom Rowley 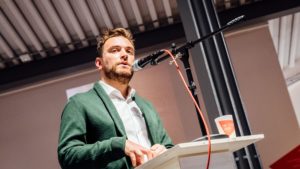 In 2019 Jonny Benjamin is fit, healthy and relishing the opportunities that come his way every day. Most will know the 31-year-old as the focus of the Channel 4 documentary Stranger on the Bridge. Screened in 2008, it told the story of how Jonny was talked down from Waterloo Bridge by a passing stranger, who he nicknamed Mike, and followed his efforts, some years later, to locate that good Samaritan, which he successfully did.

These days, Jonny and ‘Mike’ – actual name Neil Laybourn – are friends, fundraisers and inspirational figures in health and wellbeing. They dedicate their time in promoting mindfulness, exercise and the encouragement to speak out through new charity Beyond Shame, Beyond Stigma, which specifically helps young people.

‘I think it’s vital that we go back to the start of where these problems begin,’ begins Jonny. ‘For a lot of men, stress, anxiety and worry has been allowed to fester in them since they were kids, so our emphasis is getting right to the root of it in encouraging our young people to have the courage and the resources to ask for help if they feel they need it.’

Jonny’s premise for the charity is one backed by a wider belief that presenting mindfulness at primary school age can intercept mental health issues at the first stage.

‘We are in a different era now from when I grew up, and the resources are there for kids, which is great to see,’ he says. ‘Although we still have a way to go, the old adage that boys don’t cry is now starting to go.

‘It’s incredible to see initiatives such as ClassDojo’s Mindful Moment become commonplace in classrooms. I can honestly say that mindfulness has been life-changing for me and I only wish I had been taught it when I was young. I really believe it would have made all the difference to my mental wellbeing.

‘Fortunately, as more people become aware of its benefits, as teachers and parents appreciate that mindful thinking can help even very young children, I think it will become as familiar a part of school life as assemblies or sports.

‘Today’s children are tomorrow’s adults, and we owe it to their futures to get this right.’

While harnessing the power of the mind has provided a clear path through some tough times, exercise, physical fitness and movement have been important principles also.

‘Running, walking and climbing have been major things for me,’ says Jonny. ‘The release of endorphins is immense, unparalleled, and getting out in the fresh air has always been incredibly good for my mood.

‘I love the Lakes and I was up there in March this year – climbing peaks, soaking up the fresh air, enjoying the sunlight… everything. It’s an amazing thing.

‘What’s profound for me too is that because I live in London, I notice the complete change when I go to the Lake District or Peak District… the complete calmness hits me straight away.’

That’s not to say the capital hasn’t provided Jonny with cherished moments in terms of physical accomplishment. In fact, surely his greatest achievement so far was when he and Neil Laybourn ran side-by-side for the duration of the London Marathon. In an experience that again courted national headlines, the mental health campaigner admits he was forced to summon up every last ounce of inner strength to make it over the line after 26 miles, 385 yards of an experience that endorsed everything he believed in.

‘The night before, I was looking online, trying to find out what was going to happen if we didn’t reach the end,’ he admits. ‘I was convinced that it was going to take us hours and hours and we weren’t even going to get a medal for it.

‘I think that for me, it was the perfect example of accepting doubt, rationalising it, confronting it and beating it. It was another experiment in needing to conquer negativity in the mind, as well as limitations in the body, and Neil and I got through that together. What made it even more special was when we ran underneath Waterloo Bridge, where we first met – that was very emotional.

‘The marathon, and everything I have done since, provided the perfect evidence that while we sometimes view our bodies and minds as disconnected, and treat them separately, the truth is they are connected at every point.

‘If I can encourage people of all ages to use mindfulness and physical exercise in unison, I believe we will be another step along the line to helping more people achieving the wellbeing they crave.”

Jonny Benjamin MBE is an award-winning mental health campaigner, film producer, public speaker, writer and vlogger from London. He is supporting ClassDojo’s Mindful Moment initiative which encourages teachers and students to experience first-hand the benefits of mindfulness, in the hope of establishing the practice as an integral part of the school day. 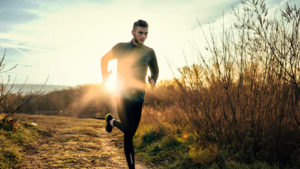 Activities good for your mental health

Activities such as climbing and martial arts can positively affect how we feel. HFM explores the science behind a mental health adventure Do you ever feel like […] 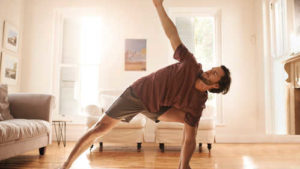 Why men should do yoga