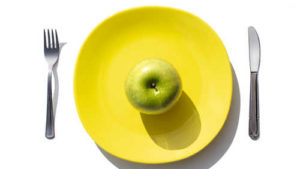 In the battle against your belly, could eating less be making things worse? HFM decodes the science so you can fight fat and win

If you’re like most people, you probably think of fat as a silent, wobbling enemy – sitting around unwanted on top of your six-pack, ruining your holiday photos and making you feel bad when you get a ham panini for lunch. As we all know, there’s a sound evolutionary reason for fat to hang around – it’s your body’s way of holding on to energy for periods when you can’t get any food. But since you (hopefully) won’t have to worry about starving in the near future, you can write off your belly as a temporary inconvenience, right? Unfortunately, it’s not that simple: a mounting body of research suggests the more fat you have, the harder it is to burn off and – to add insult to injury – the more likely you are to put it back on. But thanks to research, there are strategies you can utilise to fix this, without having to count calories for the rest of your life.

First, the obvious question: why is it so hard to lose weight and keep it off with traditional diets? The simple answer is because of the way your body responds to a lack of food. Reduce your calorie intake to 1200 calories a day, for instance, and your body automatically downshifts its ‘basal’ metabolism – the energy it’s using to keep all your vital functions going. While this happens, levels of the hunger-regulating hormone leptin fall, making you ravenous all the time. This is what’s usually called ‘starvation mode’, and it’s why so many contestants from extreme fat-loss shows such as The Biggest Loser regain the weight they’ve lost. According to recent reports, 13 of the 14 contestants from the 2009 US season have gained weight in the six years since appearing on the show, and four of them are heavier now than they were before the competition.
And it’s not because they’re eating more than most people: according to a study conducted by America’s National Institute for Health, every one of the contestant’s metabolisms plummeted after the show, and still haven’t recovered more than six years later. Danny Cahill, who won the competition in 2009, now has to eat 800 calories a day less than an average man his size, or he starts gaining fat. For Cahill, and many others like him, to keep weight off using traditional dieting methods means being hungry and low on energy basically all of the time.

There’s also another problem. Having some subcutaneous fat – the type under your skin, which provides ‘padding’ for your body – is essential, and maybe even desirable. But as you age – or eat badly – your body loses this ‘good’ fat and builds up a layer of ‘visceral’ fat around your belly and between your organs. And there’s evidence that, as visceral fat builds up, it releases substances that interfere with your body’s ability to convert glucose, leading to insulin resistance and hampering your body’s ability to burn it off. In other words, the bigger you are, the less predisposed your body is to shifting the unwanted weight.

For more on how to lose your belly, click here: Beat that belly top tips