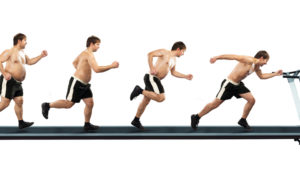 Beating the belly is not a simple task – it’s a way of life. Work these tips into your routine and you could find yourself in a gut-shrinking reality

Think calories out, not in

This, according to opponents of the just-eat-less approach (sometimes called calorie reduction as primary, the acronym of which is, humorously, CRaP), is the big problem with most people’s approach to dieting. ‘While we all obsess about reducing “calories in”, it’s virtually irrelevant for long-term weight loss,’ says Dr Jason Fung, author of The Obesity Code (Scribe, £14.99). ‘This weightloss method, in the literature, has a 99 per cent failure rate. It’s only “calories out” that’s important. If you can keep “calories out” high, then you have a chance to lose weight.’ And the way to do this? Controlling your levels of insulin.

There’s another option for those who don’t want to destroy their metabolism via traditional dieting. Studies on intermittent fasting – keeping calories in the 500-600 range for one day, then eating 2500 calories the following day – show that, even when volunteers lose weight, their basal metabolism stays the same, or even goes up. Or, to put it another way: if you always feed your body 1500 calories, your body seems to ‘expect’ to have to exist on that many calories forever, and adjusts its energy expenditure accordingly, even if you go back to eating normally, or have ample fat stores to work with. Give your body less food to work with for a brief period, though, and the fat-burning starts.
‘Let’s think about what is happening here,’ says Dr Fung. ‘Imagine you’re a caveman. It’s winter. You’ve eaten nothing for a few days. If your body goes into starvation mode, then you’d be lethargic, tired, and cold. You’d have no energy to go out and get food. Every day gets worse, and eventually you die – except that, in real life, your body isn’t that stupid. Instead, what happens is that the body opens up its ample supply of stored food – body fat. Your basal metabolism stays high, and your body changes fuel sources from food, to fat. Now you’ll have enough energy to go out there and hunt some woolly mammoth.’ You then eat your mammoth and your body switches back to food without making any long-term changes to your metabolism.

Finally, there’s hope in the form of exercise. In 2012, researchers at Harvard Medical School identified a hormone called irisin, secreted during exercise, which improves blood sugar regulation and led to weight loss in mice. Studies suggest that it works by tricking visceral fat into acting like ‘brown’ fat, a form that burns energy. The study’s been questioned by other scientists, but last year, the researchers used more precise methods to replicate their results, renewing hope that it might be possible to create an ‘obesity drug’ that helps to fight the disease by controlling the hormone.
That pill, of course, is a long way away. And not all of the research is conclusive, even on why lowering insulin is so effective. But, right now, every discovery that takes us slightly closer to understanding why diet and exercise ‘work’ is a step forward: and while it’s still a work in progress, what works is pretty well-established. ‘Eat less, move more’ is dead: long live ‘Eat better, move better.’

For more on how to lose belly fat, click here: Lose your belly fast