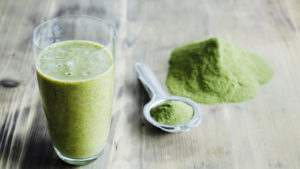 Green tea has been said to improve metabolism, burn fat and help fend off illness, which is why it’s often including in fat-burning supplement. Matcha green tea is a step up for those who want to make the most of the benefits, and switching your morning coffee to a matcha tea could give you the boost your performance needed.

The experts at Bloom have suggested that whilst drinking a cup of green tea is a healthy choice to maximise energy levels, many of the insoluble nutrients stay trapped within the leaves which are thrown away. A cup of matcha, which is ground green tea leaves, equates to ten cups of green tea. Here’s a list of awesome things matcha tea could do for you…

Studies have shown that matcha delivers a massive amount of antioxidants per gram, which can help reduce tissue damage caused by UV radiation and pollution for a natural ‘anti-aging’ regime. Matcha has true bioavailability, which means the body actually absorbs the nutrients consumed to give you fresh looking skin.

Endurance from matcha’s slow release caffeine can last up to 4 hours as L-Theanine prevents any caffeine spikes and downers, unlike coffee and sugary energy drinks. BLOOM Tea launched their SUPERCHARGE matcha with maca root and guarana for an added energy burst

Matcha contains trace minerals and vitamins (A, B-complex, C, E, and K), chlorophyll, and is a source of dietary fibre and has as little as 3 calories per serving. Research has shown that catechins present in matcha have antibiotic properties that build a stronger Immune System to defend against viruses. Check out this study for more.

According to research in the Journal of Nutrition, matcha has been shown to increase thermogenesis, the rate at which our bodies’ burn calories, from 10% to 40% of daily energy use. Matcha can boost metabolism and burn fat by up to four times without raising blood pressure or heart rate and its alkaline, which helps your body’s PH balance too.

The green tea leaves used to make matcha are shaded at the latter stage of growth, which spikes chlorophyll and amino acid production. Chlorophyll fortifies the Immune System and also removes heavy elements and harmful chemicals from our bodies.

Despite matcha containing a low 30mg caffeine, it is regulated by L-Theanine (amino acid), which doesn’t stimulate cortisol (stress hormone) like caffeine from coffee does. Instead, it promotes relaxed awareness without the drowsiness caused by other calming products.

It has been said that L-Theanine increases the production of dopamine and serotonin which enhances mood,

promotes better concentration and improves memory for up to 4 hours.

Matcha contains a high level of dietary fibre which is absorbed straight into the body to help maintain a healthy gut. This is particularly important for stabilising blood sugar levels and easing constipation.