Time to stop being confused about carbs
February 28, 2020 by Tom Rowley 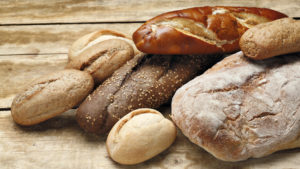 The anti-carb movement is on the march. Bread and bananas are out of fashion, while half the world is doing keto. But carbs aren’t inherently bad – here’s why you shouldn’t fear filling up

Once upon a time you knew where you were with carbs. Brown bread was fine, but wholemeal was better, the odd potato was OK, and too many biscuits weren’t great. Wind forward to 2020 and we’re in a different place entirely. Every other dude is doing keto (minimal carbs, with apparently a ton of fat). Sales of sliced loaves are in freefall. Even the humble banana is seemingly an enemy of the people.

So is it sensible to reject carbs? Sophie Medlin, consultant dietitian, thinks not. She says that while relatively recent studies indicate carbs may be linked to a bigger role than once thought in the development of heart disease, ‘that’s likely to be due to changing lifestyles during the periods the research was done. Now we’re more sedentary, perhaps we don’t need quite as many carbs as we thought.’

‘Fad online diets have given carbs a poor reputation,’ agrees sports coach and nutrition expert Ross Potter. ‘It’s true that an abundance can make you gain weight, but they’re our most vital fuel source.’

‘The evidence shows the best way to manage any medical condition is the Mediterranean diet – which is based on a fair bit of carbs,’ adds Medlin. Think wholegrains, vegetables, fruits and legumes, alongside fish and healthy fats like olive oil.

According to the NHS’s Eatwell guide, your diet should be based on fibre-rich varieties of starchy carbs such as rice, potatoes and pasta. ‘The best research still shows that’s the healthiest way of eating,’ says Medlin. ‘People online say that the Eatwell guide is making people fat. But if the public followed the proportions it suggests, we wouldn’t have our current obesity problem.’

Medlin also highlights confusion regarding the link with type 2 diabetes. ‘If you have diabetes, managing carb intake is important. But you don’t give yourself diabetes by having a high-carb diet.’

‘Carbs provide the body with a source of fuel, like the petrol in our cars,’ says Potter. ‘Should your carb intake drop from its norm, it’s reasonable to expect tiredness, poor mental function and a lack of endurance.’

Carbs are broken down in the body into glucose molecules, but the type you consume determines how quickly they’re released into the bloodstream. Processed carbs – white bread, cakes, sugary cereals – are converted to glucose faster, triggering the infamous blood-sugar high and subsequent crash, and cycle of carb cravings. Aim for unprocessed carbs instead – vegetables, fruit, wholegrains, pulses. Richer in fibre, these convert to glucose slower, so dodge the blood-sugar spike and energy slump.

‘If we’re looking at “power carbs”, I’d place jacket potatoes at the top,’ says Potter. ‘Eaten with the skin, they can have more vitamin C than oranges. Oats are another heavy hitter – they provide high fibre content, crucial for weight loss and gut health.’

‘Pulses are a mixed source of carbs and protein,’ adds Medlin, but there are some surprises. Pasta is low-GI compared to bread (it’s digested more slowly), so won’t flood your bloodstream with glucose.

Don’t automatically join the fruit naysayers either. ‘The sugar is in and out of your body quite quickly – it gives a boost, then you’re back to burning body fat,’ says Medlin. Bananas are back in.

Ultimately, ultra-low-carb diets might be on-trend but they won’t suit everyone. ‘Some people feel really well on them. Others find them very difficult,’ says Medlin. ‘But when a loud minority online say it’s the only way to eat, you can feel like a failure.’ And if you’re still not convinced, consider Potter’s final point: ‘Roughly 20% of our daily calories are used by the brain alone,’ he says. ‘It requires a certain amount of glucose to function properly. All of which re-enforces my point – carbs should never be cut from a diet completely.’ Anyone for a baked potato?