Are nootropics the future of brain performance?
April 21, 2017 by Tom Rowley 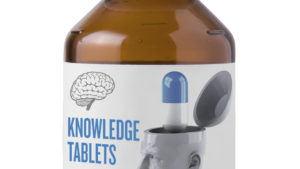 Brain-boosting drugs are on the rise, and the legality of their usage remains in murky waters. So do we really need them, and what are the alternatives?

Given that we can now fit supercomputers onto the heads of pins, ‘work smarter, not harder’ should be the 21st century’s catchphrase; yet the inverse is probably true for most of us. Our willingness to be enslaved to the office adds more weight to the latter, so what gives? If one takes his foot off the work pedal, he’s likely to quickly find himself without a means of career propulsion. On the other hand, push it to the metal and burnout is a very real scenario, too.

As we begin to unravel the intricate neural networks inside our brains and understand how and why they do what they do, medications to think faster and smarter inevitably present themselves. Why are we not taking them? Chances are you’re sharing an office with people who are indeed taking them, leaving you on a playing field in great need of a spirit level. Now more than ever, fit and healthy adults are using drugs such as Modafinil, Ritalin and Adderall – usually prescribed for those with narcolepsy or ADHD – as cognitive leg-ups. But these are powerful prescription drugs with potentially harmful side effects. However, a new branch of ‘pharmacologically safe’ brain boosters is emerging called nootropics, a term coined in 1972 by Dr Corneliu E. Giurgea, a Romanian chemist and psychologist. They’re believed to alter the availability of the brain’s supply of neurochemicals (enzymes, neurotransmitters and hormones), by improving the brain’s oxygen supply or stimulating nerve growth. Evidence of efficacy is sparse given their short period of availability, but a recent study by Onnit, a market leader in the USA that produce a proprietary stack called Alpha Brain, shows a great deal of promise, while rapid increases in sales point to a market that cares more about gaining a purported advantage than it does about double blind studies.

Tinker Men
The self-help publishing industry is worth an estimated $11 billion, and, while largely an American phenomenon, the frenzied attitude toward self-improvement has not escaped these shores. To understand how nootropics work, one must first understand how the brain performs cognitive tasks. There are two systems at play:

Monoaminergic: This system pertains to monoamine neurotransmitters. All monoamines are derived from amino acids, such as tyrosine, phenylalanine and tryptophan, and their main function is to facilitate arousal, emotional and cognitive response.

Cholinergic: This refers to the neurotransmitter acetylcholine, which your parasympathetic nervous system uses to transmit messages. Studies on the cholinergic system have shown that acetylcholine plays a role in learning and memory.

The other important factor in firing up the engine of grey matter concerns myelin, an electrically insulating material that forms a sheath around the axon of a neuron. Put simply, myelin is the Castrol GTX of your neural pathways and studies show that the cholinergic system plays a significant role in myelin health, repair and function. Thus, if you want to trump your next assessment or impress in a forthcoming interview without resortin
g to prescription drugs, you need to consume safe supplements that target these systems.

Intellectual arsenal
In 1964 Dr Giurgea first synthesised piracetam, now thought to be one of the most effective nootropics, from a chemical family called racetams. Piracetam works by boosting NMDA and AMPA receptors in the brain – the former is responsible for synaptic plasticity, or in other words, your ability to learn and remember; while the latter acts like the Highways Agency, mediating traffic throughout your brain. However, while racetams are largely deemed safe, no long-term studies have been undertaken to discover whether prolonged use has any side effects. We don’t like to gamble with our health and nor should you, so we have put together this arsenal of tried-and-tested supplements that you can seamlessly integrate into your diet. You’re welcome.

Huperzine-A
Regularly found in nootropic stacks, Huperzine-A has good credentials as a cognitive enhancer. It works on the cholinergic system by inhibiting the enzyme that degrades acetylcholine, the neurotransmitter responsible for our learning.

Choline
A study in the American Journal Of Clinical Nutrition showed that increased choline intake was related to both better cognitive performance and improved long-term memory in separate animal tests.

Creatine
Your brain’s energy requirements are supplied by a molecule called ATP (adenosine triphosphate). Creatine, abundant in red meat, effectively ramps up ATP production by binding with phosphate to create phosphocreatine, which your brain gobbles up when deep in thought. In a study by the University of Sydney, vegetarians were given oral creatine supplements for six weeks, which resulted in a significant positive effect on both working memory and intelligence.

Vitamin D
The sunshine vitamin can also shine a light on your grey matter. Higher vitamin D levels are associated with better cognitive function, according to findings published in the Journal Of Parkinson’s Disease earlier this year. For moderate supplementation, a 1000-2000IU daily dose of vitamin D3 is sufficient.

L-tyrosine
This amino acid is critical to the production of dopamine and is commonly used as an anti-stress supplement. However, a study in the journal Pharmacology, Biochemistry And Behaviour found that it also reversed cold-induced working memory deficit.

L-arginine
Commonly used to lower blood pressure, l-arginine has also been found to improve learning and memory capabilities by boosting blood levels of nitric oxide. This improves blood flow to the brain, thus having a positive effect on the cholinergic system, according to a study in the Indian Journal Of Medical Research.