Everything you need to know about a plant-based diet
January 7, 2020 by Joel Snape 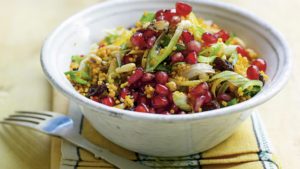 More sportsmen, celebs and ordinary guys than ever are ditching meat and animal products. But is it harder to increase your performance and build muscle on a vegan diet?

Being a vegan these days can be a fruitful experience. But once upon a time, going on a vegan diet felt a bit like joining a monastery – and not just because of all the sandals and self-denial. With a lack of options on the table, strict veganism meant voluntary social-pariah status in cafes, tricky times at dinner parties and, basically, no fun at all at barbecues.

Possibly just as importantly, it seemed to put severe limits on how much lean muscle you could expect to build: even if you’re willing to scarf down heroic quantities of hemp, there’s a restriction to what you can achieve on lentils alone. But that’s changing. In 2016, The Vegan Society commissioned research that found there were half a million vegans in the UK: three-and-a-half times as many as estimated in 2006. They’re not alone: Mike Tyson, Luke Hemsworth and the Williams sisters are managing to stay in their respective shapes on a vegan diet.

Veganuary is now in its sixth year, with 97% of 2017’s participants reporting that they felt healthier on a mostly-plants diet (around 77% stayed strict for the entire month), and 99% saying they’d recommend it to others. And there are plenty of reasons to give it a shot, whatever your feelings about adorable chickens and lovable cows: in 2015, talks in Paris concluded that reducing global meat consumption is critical to keeping global warming below ‘danger level’, prompting Arnold Schwarzenegger himself to suggest people cut back their carnivorous tendencies with a couple of meat-free days a week. ‘Luckily, we know that you can get your protein from many different ways,’ said the Governator at the time. ‘You can get it through vegetables if you are a vegetarian. I have seen many bodybuilders that are vegetarian and they get strong and healthy.’

He’s not wrong. Part of the reason is vegetable consumption: barely any of us are getting enough, especially given Imperial College London’s 2017 research concluding that 10 portions a day is the optimum for staving off cancer, stroke, heart disease and premature death. But, just as importantly, things have changed since Arnie’s days on the Mr Olympia circuit. Nutrition is better understood, and there are more options available for the vegan gent aiming to top up on the nutrients that it’s tricky to get via a vegan diet. More products offer vegan alternatives, and the majesty of the internet makes the vegan diet an easier proposition than ever.

So just how should I go about joining the vegan bandwagon? ‘One of the most common pitfalls is simply not getting enough calories,’ says Bethan Hamilton, nutritionist and national educator for Vega, America’s best-known protein brand. ‘If you’re doing a lot of exercise, just eating a bowl of veggies is not going to cut it. You need to eat enough calories to support your active lifestyle, which may be hard to do at first when altering your diet. So, make sure you pack that plate with carbs, protein and good fats, too.’

This, for me, wasn’t a problem: I’m already used to having avocados and nut butter on hand at all times, so I just upped my consumption. Protein was a slightly bigger problem: I’m usually a steak-on-Saturdays and Sunday roast sort of chap, so finding another source was a key priority. ‘Lack of protein’s a common concern among people trying out plant-based diets,’ says Darlene McCormick, co-founder of That Protein. ‘Higher-protein diets promote muscle repair, strength and satiety. Protein is vital for muscle and bone health, and also our cellular structure – about 20% of the human body is made up of protein, but as our bodies don’t store protein, it’s important to get an adequate amount from your diet every single day. Thankfully, there are plenty of protein rich plant-based foods to consider including tofu, pumpkin seeds, lentils, quinoa, hemp, chia and beans.’

The biggest problem? Few plant sources contain the complete range of amino acids needed to maintain muscle, which occur naturally in meat. That means some creative mixing and matching. Luckily doing this through the day, rather than at every meal, is enough. ‘Think multisource,’ says Hamilton. ‘If you can’t get the full range through diet alone, add a complete, multisource protein powder blend like Vega Clean Protein, which contains 25g of plant-based protein from pea, hemp, alfalfa and pumpkin (£26.99 for 518g, hollandandbarrett.com).

What about soy? This is where things get tricky. As a source of protein, it’s excellent – soybeans can be up to 48% protein – but when eaten in high quantities, it’s been linked to the disruption of the body’s natural hormones, and excess oestrogen in particular. For safe consumption, take cues from Asian cultures, where it’s mainly eaten in ‘wholefood’ form as edamame, for example, or fermented, as in miso, tofu and soy sauce.

Processed foods strip out the plant’s natural fibre and carbs, leaving pure protein, so excessive consumption of soy-based processed products isn’t necessarily a good idea. Not a problem: I was planning to do most of my own food-prep anyway. Cookery, after all, is where real vegans succeed or fail: it’s easy enough to go technically vegan at every meal (jacket potato and beans for lunch every day? Rice for dinner? Crisps for pudding? Bingo!), but at that point you’re losing out on the benefits for a momentary taste of smugness.

‘If you’re eating lots of whole foods and staying away from processed food, then you’ll have a really healthy diet – and you may find new foods you’ve never tried before you really love,’ says Ben Lewis, nutritional director of vegan-friendly supplement brand Pulsin. ‘Going vegan is the perfect excuse to load up on vegetables that you never regularly ate before. Challenge yourself to experiment more.’

The key, I found, is to give yourself extra time to cook, and do it in bulk. Chickpeas and beans, for instance, are a solid way to add protein and stodge to meals. Dicing mushrooms adds bulk, but not calories. And prebaked aubergines will save your life: they’re good for everything from burger mix to bolognese. However, the hardest part of strict veganism is on-the-go eating: grabbing a quick wrap, a packet of crisps or a glass of wine after work.

Eating out isn’t great: it’s OK if you can steer your friends to vegan-friendly places, but otherwise you’re in for some awkward conversations and menu dithering.

But then, maybe there’s a better way. Veganism, after all, is a bit of a loaded term: you’re either full vegan or you’re not, and bringing up the V-word is a surefire way to inspire ire from both sides if you occasionally have a fried egg sandwich.

A better alternative, for most people, might be to switch to what nutritionists are increasingly calling a ‘plant-based’ diet: eating most meals meat-free, and replacing it with vegetables and pulses rather than ‘facon’ (veggie bacon) or soy lattes. That way, you can feel better about climate change, less guilty about all those calves and chickens, and combine the benefits of steak and eggs with a hefty hit of phytonutrients.